Can you take a couple different ways home after a road trip?  You might get the itch to take the scenic route or you might just jump on the interstate and cruise to one of several different exists depending on traffic.  Well for the sun soaked people in the Florida Keys, there’s only one road home and that’s the historic overseas highway.

Here is a great story about US 1 that I’ve had on my Facebook fan page for some time.  Carol Shaughnessy, from the Keys Voices wrote about this great stretch of pavement and why its a true piece of Americana.  Enjoy.

from Keys Voices by Carol Shaughnessy

The southernmost stretch of U.S. Highway 1, running some 110 miles from mainland Florida throughout the Keys to Key West, has earned many names over the years. It’s been called the Overseas Highway. The Highway That Goes to Sea. And on October 16 it earned the right to be called an All-American Road, the highest national designation a roadway can receive.

The Florida Keys’ Overseas Highway is now an All-American Road … the only one to earn the top national designation in Florida and one of just 31 in the entire U.S..

The Florida Keys' landmark Overseas Highway is now an All-American Road ... the only roadway to earn the top national designation in Florida and one of just 31 in the entire U.S..

The Florida Keys’ landmark Overseas Highway is now an All-American Road … the only roadway to earn the top national designation in Florida and one of just 31 in the entire U.S..

But for those of us who love the Keys, whether as residents or regular visitors, the highway has a simpler and more elemental designation: it’s the road home.

Heading south from mainland Florida, the highway leads into a world of seemingly endless water and sky. On the left, the Atlantic Ocean unrolls to a blue horizon; on the right lies Florida Bay and, further south, the Gulf of Mexico.

From the mainland to Key West, an astonishing 42 bridges leapfrog between islands. One of them, the Seven Mile Bridge at Marathon, stretches 6.79 miles across open water — and was once nicknamed “the eighth wonder of the world.”

Yet the Seven Mile Bridge wasn’t always a highway bridge, and the Overseas Highway wasn’t always a road. It began as a railroad, the brainchild of millionaire Henry Flagler, who envisioned a train route connecting all the Florida Keys and mainland Florida. Flagler 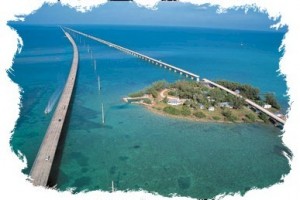 The Florida Keys' landmark Overseas Highway is now an All-American Road ... the only roadway to earn the top national designation in Florida and one of just 31 in the entire U.S..

inspired an army of men to spend seven years constructing the railroad’s bridges and land-based tracks, and in 1912 the first train pulled into Key West.

After only two-plus decades of carrying freight and wealthy vacationers, much of the railroad was badly damaged in a 1935 hurricane. Three years later the Overseas Highway debuted, built on a foundation that incorporated some of the original railway spans.

In 1982, 37 original bridges including the Seven Mile Bridge were replaced with wider spans (eagerly welcomed by those of us familiar with the scarily narrow old bridges). About a third of the original bridges were removed during the project, but three of those remaining — the Long Key, Bahia Honda and Seven Mile bridges — are on the National Register of Historic Places.

Traveling down the Overseas Highway, drivers can see many of the old bridges running alongside the newer ones. And all of us who travel the road regularly have our favorite stretches and sights — talisman vistas that offer a welcome foretaste of home on the southward drive. For example, when I reach Islamorada in the Upper Keys, I can’t help smiling as I pass a particularly beautiful cluster of contemporary oceanfront homes. Spotting the pocket-sized island of Pigeon Key, nestled beneath the Old Seven Mile Bridge, inspires daydreams about living in one of its tiny restored cottages.

Farther along the Old Seven Mile Bridge, defying natural logic, five scraggly bushes sprouted on the weather-beaten pavement years ago and somehow have managed to survive. For me, they’ve become leafy mascots. Every time I cross the newer bridge, I glance anxiously over at each bush to make sure it’s still hanging on.

The historic Old Seven Mile Bridge, at right of the newer bridge, cuts through tiny Pigeon Key and is home to five unlikely but beloved bushes.

The historic Old Seven Mile Bridge, at right of the newer bridge, cuts through tiny Pigeon Key and is home to five unlikely but beloved bushes.

Just before Big Pine lies one of the highway’s prime vistas. At Bahia Honda State Park, a portion of the old Bahia Honda Bridge arches up against the sky, a stark and throat-catchingly beautiful reminder of the Keys’ past glories.

To earn All-American Road status under the National Scenic Byways program, a road must have nationally significant archeological, cultural, historic, natural, recreational and/or scenic qualities — and must possess features that don’t exist anywhere else, making it a visitor destination in itself.

The Overseas Highway certainly fits the bill. It’s the first and only Florida road to achieve All-American status, and it joins just 30 other All-American Roads in the entire U.S. So the designation is prestigious indeed.

But no matter how impressive the honor, it can’t eclipse the status the Overseas Highway already possesses in the hearts of Keys residents and those who wish they were. It’s our highway, our connection to each other and the outside world — and always, our road home.

Have you been on the Overseas Highway?  Ever picked your jaw up from the floor boards while taking in the amazing vistas the roadway has to offer?  The Keys are America’s Caribbean and if you have ever made the drive down to Key West or the other keys you will know why.

What is your take?