One Man, One Idea, and how they became the pulse of an island nation.

There is no doubt, Bob Marley is Reggae music’s ambassador, spreading its gospel to the whole world and literally became the main reason for the popularity of Jamaica. Bob Marley’s outstanding and phenomenal efforts for the development of Jamaican music as we know it now carried the art to a higher level of spiritual and social force which appealed to extensive audiences form all over. Although he did not manage to land a number one hit in America, Bob Marley was inducted to the Rock N Roll Hall of Fame giving credit to the legacy he left and the way he changed the cultural setting of the international music scene.

Reggae music is supported by Marley’s beliefs on the Rastafarian movement which is a religious sector who regarded Emperor Haile Selassi I from Ethiopia also known as Ras Tafari. The Emperor is said to be god who’ll be able to free blacks from total oppression and lead them back to a promised African homeland. Bob Marley delivered his music with conviction in a passionate way.

The unique signature of Reggae music with its hypnotic rhythms and enchanting tunes started to gain its popularity in the seventies. Bob Marley and his group The Wailers came out with albums such Natty Dread and Rastaman Vibration

under Tuff Goff Records in Jamaica; music which were clear reflections of the hardships and life of a less fortunate Jamaican community also representing those oppressed all over the world. The uplifting spirit that can be felt when listening to reggae music was called “positive vibrations”. During troubled times, Bob Marley’s music was a powerful medium to spread wisdom, peace and the gospel.

Jamaica is Bob Marley’s birthplace, having a white father and a black mother which made him a mixed race. During his teenage years in Trench Town, he grouped with Neville “Bunny” Livingston and Peter McIntosh to form the group trio Wailing Wailers later known as The Wailers, all of them born in the ghettos of Jamaica. The group was highly influenced by American radio listening to the famous R & B stars at that time such as Ray Charles and Fats Domino amongst others. They become part of the Rastafarian movement and as Rastas, they had long hairs in dreadlocks and they smoked marijuana also known as ganja because it was a belief that in doing so, the spiritual path to enlightenment and a means of communication with the heavens is opened. Marijuana is considered sacred, religious and a healing herb by the Rastas. 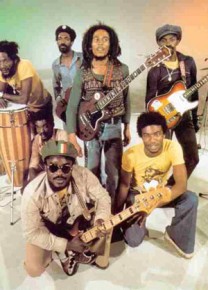 Bob Marley and the Wailers

During the sixties, The Wailers put out an album under some small Jamaican recording companies. Ska was the more popular Jamaican music then which was a mixture of New Orleans R & B and African rhythms. “Simmer Down

” was the official first hit single of The Wailers. They continued to record more with the ska style while Jamaica was slowly shifting to the steadier and sensual beat of rock steady. A collaboration project with Lee Jerry, a producer, resulted in the Wailer’s significant song recordings which were “Duppy Conqueror” and “Soul Rebel”.

The Wailers became internationally famous when they worked with Chris Blackwell of Island Records. They completed several more albums which further catapulted the popularity of reggae music but Bob Marley had to blaze his own way, seperate from the two other Wailers. He continued to pursue his musical career backed by a bigger band and some back-up singers and became the powerful soulful musical icon who represents the ways of the Rastafari.