Walking Through the History of St. Thomas

Walking Through the History of St. Thomas

Though St. Thomas is known as one of the best shopping destinations in the Caribbean, the island is also home to a wealth of historical intrigue. Within a concentrated area of St. Thomas’ capital city, Charlotte Amalie, visitors will find everything from ornate churches and government buildings to colonial forts and mythical pirate outposts. If you want to experience St. Thomas’ fascinating history, there is no better way to see the sights than a walk through Charlotte Amalie amongst the beautiful Caribbean weather.

The best place to start a walking tour of Charlotte Amalie’s historic sites is Fort Christian, a Danish-built structure dating to the late 17th century. Visible throughout Charlotte Amalie, this vivid red-brick fort is in fact the oldest remaining structure in the Virgin Islands. Having served as a government center and a church after the colonial period, Fort Christian is now a National Historic Landmark and history museum. After visiting the museum, be sure to visit the roof of Fort Christian for an excellent panoramic view of the harbor.

Directly across the street from Fort Christian, you will see the historic Legislature Building, a beautifully rebuilt colonial structure. After serving as barracks for Danish police and later for U.S. Marines, the Legislature Building was completed restored in 1956 and has served as home to local lawmakers since 1970.

From the courtyard of the Legislature Building, turn left and follow the sidewalk to the first traffic light. At the traffic light, turn right and look for the Vendor’s Plaza on your left. Above this outdoor market, you will find Emancipation Park, the site of many official ceremonies and the Virgin Islands’ replica of the Liberty Bell.

Directly across the street from Emancipation Park is the Grand Hotel, a 19th century structure that now houses a number of small shops and restaurants. After perusing the unique businesses inside the Grand Hotel, walk towards Fort Christian and turn left up the first narrow road.

At the top of the narrow path, you will come upon one of St. Thomas’ most significant churches, the golden Lutheran Church. Known for its large staircase and bright yellow color, the church is one of the most photographed buildings in St. Thomas. Once the official church of the Danish West Indies, the Lutheran Church is still used for services today.

Turning right after leaving the Lutheran Church, you will walk past Post Office Square and a trio of statues. As you continue up Government Hill, you will come upon a street known as Kongens Gade, site of the 99 Steps. Constructed in the mid-18th century, these steps represent the Danes’ attempt at city planning near the hilly shores of St. Thomas. The land surrounding Blackbeard’s Castle is home to several town house museums, including Villa Notman and The Haagensen House. In each case, these musuems house everything from antiques to valuable Danish furniture. After leaving the area of Blackbeard’s Castle, return to the area of Post Office Square and Main Street. After turning right onto Main Street, look on the right for a small street called Nye Gade. 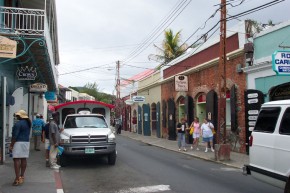 One block further up Main Street, you will find St. Thomas’ primary Catholic church, Saints Peter and Paul Cathedral. Constructed in 1806, the cathedral is known for its ornate murals painted by Belgian artists, Father Leo Servais and Brother Ildephonsus.

While history probably won’t be the first thing on your mind while in St. Thomas, the island features a wealth of important sites within a very walkable area. After enjoying the beach and the relaxing amenities of your resort, this simple walking tour of Charlotte Amalie offers a great way to spend a sunny afternoon.

Justin Burch writes articles about travel in St. Thomas for the Marriott Resorts.