History of the Bahamas

History of the Bahamas

The Bahamas are a good example of what most people think of when someone talks about an island paradise. The islands have had an exciting history, with illegal activities and periods of economic prosperity and poverty.

The history of the Bahamas begins with the Lukku-cairi who were the first settlers on the islands. They were originally from South America and settled the islands around the 9th century AD after they wandered up through the Caribbean to the Bahamas. They were also known by a couple of other names, the Lucayans, the Arawaks or, as Columbus mistakenly called them in, Indians. Columbus was mistaken in naming them, because he thought he had landed in the East Indies and designated the natives as Indians.

The islands were also known for piracy, since the location of the islands was ideal for illegal activities. Many famous pirates such as Blackbeard and Anne Bonney were in the Bahamas for at least part of their careers. Generally, the pirates would lure ships into the shallow waters near the islands and when they were grounded, they would raid the ships. In 1670 England claimed the islands as their territory. Even then, with the greatest navy at the time, Britain was helpless to stop the pirates. In 1718 the first governor of the islands took over and managed to drive the pirates out. At that point, England recognized the Bahamas as an official colony. 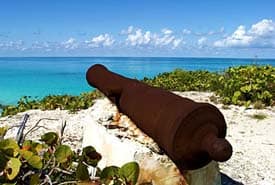 Officially, piracy was over. However, during England’s war with Spain and during the American Revolution, an official form of piracy, privateering, continued in the islands. Privateering was sanctioned by the government and brought sporadic periods of prosperity to the islands. In May 1782, Spain took the Bahamas from the British after the Spanish had entered the American Revolution, siding with the Americans. With the signing of the Treaty of Versailles in 1783 however, Spain gave the Bahamas back the England.

With the end of the Revolutionary War, some southerners who had remained loyal to England left the newly formed United States and relocated to the Bahamas, bringing their slaves with them. These settlers began to grown cotton in the Bahamas under the protection the British government. When the American Civil War began, the Union navy attempted to blockade the Bahamas. The Civil War was a prosperous time for the Bahamas, as the residents began running cotton from the Confederacy to England and even managed to send equipment to the Confederacy.

After the Civil War, things calmed down somewhat in the Bahamas. With the advent of prohibition in the United States, the Bahamas prospered yet again as the area became a base for illegal alcohol running to the States. With the repeal of Prohibition however, yet again the islands experienced a period of economic uncertainty.

With the advent of World War II, the Bahamas began to play a new role. The islands became a way-station for jets and navy ships in the Atlantic. As the war ended a new more prosperous adventure began. The islands began to be recognized as a desirable tourist destination and visitors began to bring new life to the economy of the islands. In the 1950s, when Cuba was closed to American tourists, the Bahamas became an alternative destination for those who wanted to visit the area.

In 1964, England gave the islands the ability to govern themselves and changed them from a colony to a Commonwealth in 1969. By 1973 the Commonwealth of the Bahamas became independent within the Commonwealth, but decided to keep Queen Elizabeth II as their head of state.