Legend of the Cursed Rum – Part 1

Fascinated by stories of pirates, rum and adventure? Then this is the story for you.

The Sandy Slippper, Beach Outpost and myself teamed up and wrote a short story. We each wrote a part totally independent of the other two. We had no idea where the story was going or starting. An experiment if you will.

The Legend of the Cursed Rum starts here. Read it if you dare!

This story of adventure, tropical islands and debauchery all started one stormy night in Key West.

Marco Appleton is a thirty something Bahamian born bar owner living in Key West Florida. His late father willed him the family business, a thatch covered tiki bar on the north side of Duval Street called Bikinis, Boats and Brew. The locals know it as the 3 B’s bar.  Marco is ambitious but loves the casual island life. He craves just a few things in this world; money, rum, women and more rum.

It’s early July and tropical storm Erin is making a fuss outside. The only people in the bar this night are Tucker Gay and Captain Bob. Tucker is Marco’s happy go lucky, sun fried bartender. His hair is long, dirty looking and bleached by the sun. On his bad days he could pass as homeless.

B.O.B. Bob is a drunken old slob. He is a local sailboat owner that begrudgingly takes pale skin tourists out for sunset and dolphin cruises on his mistress of the sea, Nora the Ocean Dancer. Captain Bob is a regular at the 3 B’s bar and he likes his rum straight and dark.

The three burn the hours away alone, drinking rum and whatever as Erin rages. She pushes the more timid souls indoors. Conversations of women and stories of the sea fill the air.  It’s 1am and the 3 island boys exhaust all the rum behind the bar.  Not wanting to call it a night, Marco, with a glimmer in his eye tells Bob and Tucker that there is one more bottle.  It’s the bottle his father left in the office desk. He had always told Marco to never ever drink this bottle. It is a good luck bottle and it’s to be hidden and kept sealed at all times.

Those rules float right out of Marco’s fuzzy mind as he reaches to pick up the bottle. Hell, there is a terrible storm outside and he is thinking it’s a damn fine idea to pop the top on this unlabeled bottle of rum. “I need a little luck on a night like this.” he thinks to himself.  As Marco picks up the bottle he can tell its weight is a little heavy and doesn’t have a fluid feel to it like something filled with liquid would have. He wondered if the bottle was a little off or if it was him and his rum soaked gray matter.

Marco meanders back to the front of the bar where Tucker and Captain Bob are commenting on how attractive Stephanie Abrams from the weather channel is. “Games faces on!” Marco says, as he hands the dusty bottle to Tucker. Tucker also notices something strange with the bottle. The bottle has a red wax seal with what looks to be a skull and cross bones imprinted in the wax. Is this rum or poison Tucker thought as he brushes the hair from his eyes and begins to crack the seal of the strange bottle.

BAMMM! Suddenly a flash of lightening fills the sky flowed by a deafening crash of thunder.  The lights flicker and a cold mysterious wind blows through the 3 B’s bar. The 3 jump slightly in their seats as Tucker pours the first glass. To their curious eyes, sand, not rum pours from the bottle. Confusion and a little disappointment wash over their faces.

Marco carefully picks up the weathered looking scroll. They look at it with a quizzical gaze and question what the hell it might be. Captain Bob in his misguided brilliance suggests it maybe toilet paper and that the owners kept it in a bottle to keep it dry while at sea. Shaking his head, Marco unties the delicate scroll and spreads it flat on the sandy bar.

What lies before them is an old map of the Florida Keys, South Florida, the Caribbean and the Bahamas. It was hand drawn and none of the islands had names. There are a few Spanish words written off to the side and a large skull and cross bones over an unnamed island in the Bahamas. It was obviously a map to something, but what. Could it be to a 300 year old Spanish treasure, or maybe it’s a fake or decoy map.  Maybe it’s just a crazy trick Marco’s father is playing on him from the dead.

As Marco and Captain Bob question the authenticity of the map, Tucker picks up the bottle to look it over more closely. As he picks it up the clanging noise again resonates from inside. He holds the bottle up to the light to see what the origin of the odd sounds is. Between his blurred vision and the cloudy bottle he couldn’t make out the source of the mysterious noise. 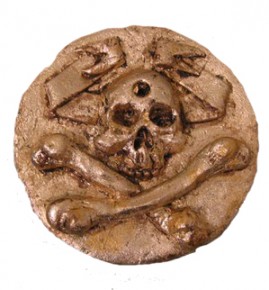 Without warning Marco grabs the bottle and hurls it towards the concrete floor. The old bottle shatters on impact. The 3 befuddled men lean over the broken bottle and marvel at it’s contents. Laying on the dirty bar floor right in front of them are 7 gold coins with some of the same markings on them as the map.

Lightening again flashes and lights up the bar and the entire white cap covered harbor. This time thunder doesn’t follow. The only thing heard was Marco’s crystal clear words, “You guys want to take a little trip.” The 3 smile ear to ear.