The Bomba Surfside Shack, located on Tortola in the BVI, is a beach bar built with love and whatever scrape material that happened to be laying around the island. Bomba built his surfside shack on the beach in Cappoons Bay,  Tortola in 1976. Not having a lot of money for building supplies, he used driftwood, pieces of tin roofing, broken surf boards and anything else he was able to find or which happened to wash up on the beach. The end result is a beach bar like none other, distinctly eclectic, ever changing, collage of trash … which somehow works!

The “decorations” include Graffiti contributed by visitors, faded photos of women in various stages of undress, panties and bras and license plates from around the world! 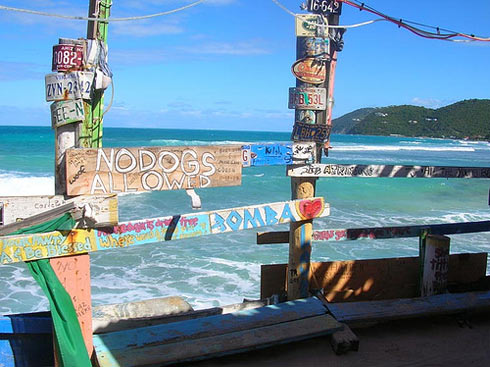 When Bomba first opened there was not much money to stock the shelves with drinks to sell, so friends would drop off leftover booze at the Shack, and that’s when the Bomba Shack started to boom. Constantly adding to the size of the Shack is an ongoing project, Bomba is still using the dropped off excess pieces of whatever from the land or sea!

The Bomba Shack has survived every hurricane that has passed over the British Virgins Islands. It has been damaged many many times but has always been built back up to great joy of the shacks loyal patrons. And with new materials washed ashore by the passing storms, Bomba’s always seems to get bigger and better! A few years ago, due to such large crowds that would come to the world famous Bomba’s Surfside Shack Full Moon Parties, Bomba expanded the Shack across the road from the original beachside Shack to what Bomba calls the “Back Yard.” Not much more than a field where cattle graze during the daytime, Bomba has built, once again with whatever comes to him, a large bar and a bandstand where he gets some of the best local bands to rock all night during the Full Moon Party, which of course is held every month. In 1989, Bomba decided to hold full moon parties, a tradition which continues today. Much like an island style tailgate party, the full moon party takes place on the road between Bomba’s two buildings and provides an excellent opportunity for people watching, limin’ and having a great time! I must warn you though, I’ve heard some crazy stories about the Bomba Full Moon Parties. They are no place for children or people easily offended. Just my type of place!

The wild full-moon party takes place monthly at the shack and its star, Mr Bomba himself, is grand chef of the infamous Midnight Tea. 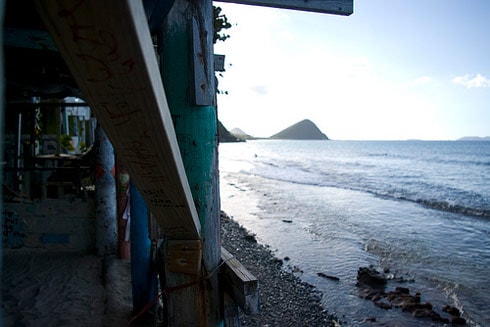 A Beach Bar In Paradise

Legends abound over the composition of this strange brew. It has been said that they spice up the tea with a brand of local fungus purported to have strange psychotropic effects. Visitors are warned! What is known is that the brew contains rum (lots of it) and local fruit juices, and that it bubbles away in a cauldron across the road from the Shack. I think the special effects of this tea are mostly myth, but it’s fun to think about wild you sip away the night…what great marketing! Beautiful Painting of the Bomba Shack by Laura Redding

A blissful haze of rum and fruit juice, dancing feet on sand, lapping waves and sweet soothing reggae rhythms promises to sweep you away into the tropical night, carrying you through until the sun rises over the waves… Need I say more?

If you have been to Bomba’s or have any fun stories to share about this one of kind beach bar please share!