Mishka Performs at the No Shoes Radio Beach Bash

Mishka Performs at the No Shoes Radio Beach Bash

The stars will be shining, and on this night in the Bahamas, Mishka made those stars shine just a little brighter. The last night of the No Shoes Radio Winter Beach Bash concluded with an intimate beach setting and the smooth rhythms of reggae star Mishka.

The  day started off with a bunch of NSR fans setting sail on booze cruise that bounced around some small islands just off Nassau. Organizing this foray took place the day before at the NSR Pool Party, and at the time, it sounded like the best idea in the history if ideas, so I signed up. Mind you, I was rum soaked and my head was filled with the smoke of a Cuban cigar, so any idea would have sounded Earth shattering at the time. Fortunately, my better half talked some sense into me once the haze of the pool party had lifted.

She said, “You’ll drink too much on the booze cruise and won’t be able to function for the Mishka concert, let’s go do the laid back Dolphin Encounters instead”.  I guess she knows me pretty well.

The night’s festivities started out with Tambo cranking up the NSR live broadcast from the sands of the Sheraton Beach Resort. They were minus one DJ though. A casualty of a booze cruise so I hear. Really glad I met those dolphins.

Here is Mishka being interviewed before his show. Mishka Talks With No Shoes Raido

Here is a shot of yours truly on air and trying not to curse with the No Shoes Radio guys. 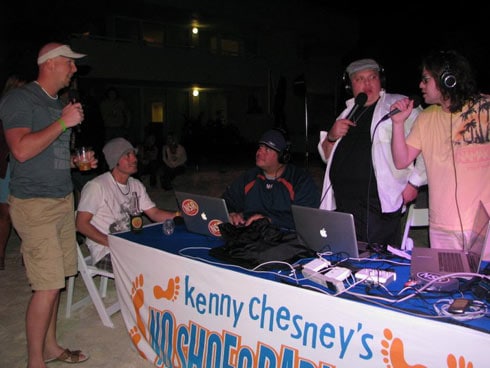 RumShop On Air with No Shoes Radio

Time for Mishka to hit the stage. If you haven’t heard of Mishka, slap yourself. His music contains vibes and rhythms that make the laid back island lifestyle come alive. Grab a drink, plant yourself in a hammock and chillax with Mishka playing in the background. You’ll be transported to a special place, I promise.

Here are some videos and photos from the concert. 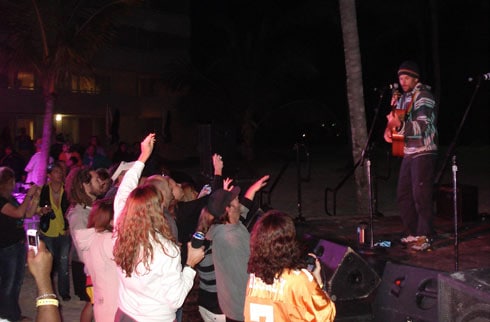 The No Shoes Radio Winter Beach Bash was a great time and I’m sure a much needed get away for everyone that came from the snow covered parts of the States. It’s true what they say, It really is better in the Bahamas.

For me one of the biggest highlights of the trip was meeting all the cool people. NSR fans, Mishka fans, fans of the Bahamas…Castaways all. Here are some of these cool people. 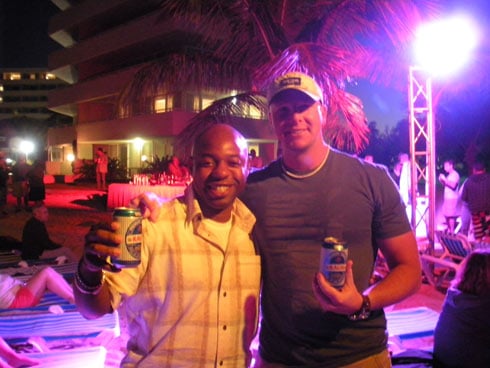 Tambo of No Shoes Radio The party ended and everyone stumbled back to their hotel rooms and dreamed of dancing, sans shoes, in the soft sands of the Bahamas.

The next day many of us flew back home to our real world realities and reflected on the good times had. I don’t know about the others, but I had a hard time concentrating at work for a few days after. Good music, cold Kalik, smiling faces and blue blue water filled my thoughts. I’m already looking forward to next year, when we all gather again on some yet to be determined island in the tropics, where we will sing, we will dance, and the stars will shine just a little bit brighter.