Inspiring, rejuvenating, breathless beauty, those are the words that come to mind when I think about Bahia Honda State Park in the Florida Keys. This time last week my toes were buried in the white sands of this park, a needed pit stop on the way to Key West. I’d been driving by this island park for years and never stopped before, I now realize that I’d been making a big mistake.

This episode of Island Lime Videos takes us to the shores of Bahia Honda, where the water is crystal clear, the coconut palms dancing gently in the sea breeze, and time slows to a conches pace. Enjoy the video and watch as the island slowly unfolds before your eyes.

Beautiful isn’t even a strong enough word. We should come up with new adjectives to describe places like this.

Bahia Honda State Park was part of Henry Flagler’s East Coast Railway holdings. The railroad remains were converted into what is known today as U.S. Highway 1. Presently, the Old Bahia Honda Bridge serves as a reminder of Flagler’s dream. A section of the old bridge offers visitors a panoramic view of the island and surrounding waters. Since the initial acquisition of the first 13 acres of the park in 1961, Bahia Honda has become well-known as a recreational treasure.

Living History
When traveling through the Florida Keys, visitors see remnants of an extraordinary feat of engineering – Henry Flagler’s Overseas Railroad. Life in the Florida Keys was changed forever by this construction project that began in 1905. Thousands of men worked on the railroad that was built above the water and islands from Miami to Key West. (Info from BahiaHondaPark.com) 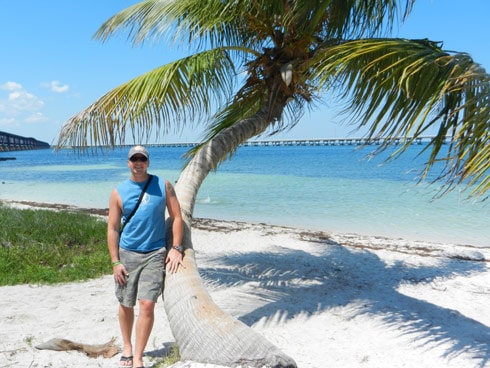 Have you been to Bahia Honda before? I’m already planning another visit to the Keys and I can guarantee you that this jewel of an island will be on the itinerary.

Cheers to the weekend Castaways!