One sip and you’ll surrender. 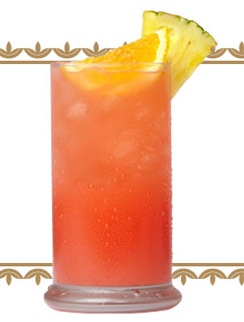 If you haven’t heard yet, Mr. Cabo Wabo, Mr. Red Rocker, Mr. I can’t drive 55 has a great new rum on the market. Sammy Hagar, best known for his tequila, has been working hard on his own brand of rum called Sammy’s Beach Bar Rum. I posted the Beach Bar Rum press release here a couple months ago letting people know all about the new spirit. When a new rock star rum like this is released it’s my duty to tell you Castaways all I can about it, and the best way to do that is by tasting it of course!

Mixing Instructions: Shake with ice and strain into punch glass. Garnish with orange slice and pineapple. Raise glass and toast.

So why is Sammy’s Beach Bar Rum different than other cane rums? It has to do with their brand new still and the way the rum is made. Most cane rums are made from pressed sugarcane juice, Sammy’s Beach Bar Rum is made from Hawaiian slow pressed sugarcane. I’m going to let my buddy Carl Grooms from Coastlines & Tan Lines tell you about the fine details of the Beach Bar Rum making process. He does a much better job than I do at explaining that stuff. I’m more about the cocktails!

Handcrafted at the Haliimaile Distilling Company on Maui, the specialty rum is now available in retail outlets, restaurants and bars throughout Hawaii, with expansions to select Mainland states slated to begin in early 2012.