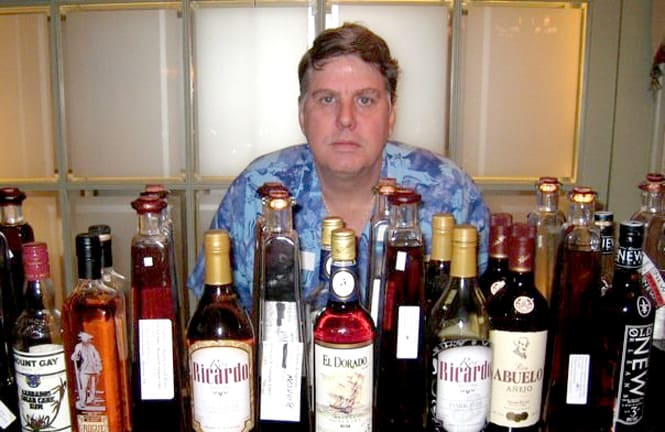 Do you like rum, I mean really like rum? Would you be able to control yourself if you were in a room with over 60 rum companies all offering taste testings and cocktails? Control might be an illusion.

The Miami Rum Renaissance Festival is next month and you’ll have a chance to test you’re self control. Excitement is building for the biggest rum event in the country, what better place to get the low down than from its creator, Robert Burr Sr.

I was able to snag an interview with Robert and pick his brain about the Rum Renaissance. Robert is a wealth of knowledge about rum and a lot of fun to hang out with. Let’s see what he had to say about the week long rum party on Miami Beach.

So you’re the master, the head rummy, the organizer of the largest event in the states, how and why did you start the Miami Rum Renaissance?

I’ve been a judge in numerous rum tasting competitions around the country and around the world. Back in 2007, I was not too impressed with other “rum festivals” in the U.S. In my mind, a couple of hours sampling rum in a restaurant is not a festival. I discussed the idea with my wife Robin and son Robert and we agreed we could put together a show that would attract larger crowds from near and far and give the category of rum a much deserved boost. We had great cooperation from the Morgan’s Hotel group and all the rum brands. Our first event at the Shore Club on Miami Beach brought 1,100 people from around the world. Sometimes the best ideas are almost too obvious. A grand festival of rum in Miami is so obvious, it’s surprising no one tried to do it before.

Rum is growing in diversity and popularity, it seems like ever other month there’s a new brand of rum hitting the market. Not a bad thing, but how do you tell the good rum from the bad? Is there such a thing as bad rum?

Bad rum is getting harder to find. Distillation technologies have improved greatly in the past decade. Most large distilleries have their operations managed by computers and sophisticated software controllers. The result is less variation in the product, leading to more dependable and consistent results day by day. Hybridized yeast is making fermentation more efficient and consistent. The maturing of rum in barrels and vats is also being aided by computer applications, bar codes and inventory control systems. Small distillers can still create a batch of rum that’s not ideal. Sometimes they try to blend it into larger quantities of good rum to hide it, but that’s more of a rare occurrence that in previous decades. Yes, more fine rums are coming to market every week and every month. We’re living in the golden age of rum. There has never been a better time to be a rum enthusiast, a rum adventurer, a rum connoisseur, a rum collector.

What is the strangest rum you’ve ever tried? I’ve heard of Scorpion Rum and Viper Rum with actual dead critters in them. I bet you’ve tried some crazy ones.

People put all kinds of things in rum. When you get off the grid in the outer islands, there’s some unusual customs. I tried a strange spirit called “boy baby” rum that is guaranteed to give the drinker male offspring. It has a strange combination of seeds, bark, leaves, herbs, flowers and roots infused with overproof rum right off the still. I can’t say personally if it works, but the locals swear by that.

If you had to pick your three favorite sipping rums, what would they be?

Tough, very tough. I’m highly appreciative of so many styles of rum  — from the earthy Guyanese and robust Jamaicans to the old school Bajan spirits, exquisite blends from Guatemala, Panama, Venezuela and Peru, classics from Nicaragua and Puerto Rico, the complex rhums of Martinique and Guadeloupe, the legacy rums of St. Lucia, Antigua and Trinidad. I fell in love with sipping rum back in 1976 when I first discovered Barbancourt Reserve du Domaine from Haiti. Since that time, there has always been a bottle in my freezer. I’m a sucker for fat, bold Navy rums like the infamous Black Tot Last Consignment. It’s hard to find, but I love the 25 year old Opthimus from Oliver & Oliver in Dominican Republic. Bacardi’s new 150th anniversary Ron de Maestros is exceptional, but I have yet to acquire a bottle for $2,000.

This will be the 4th annual Miami Rum Renaissance right? I’ve been to the last two and enjoyed the grand tasting event, what other type of events will be going on throughout the week?

Yes, we started with an test event in 2008 at Coral Gables Venetian Pool that quickly sold out the maximum capacity of 150 friends at the pool. We had about 50 great rums and it was a hell of a good party. From there, we starting planning the 2009 Miami Rum Renaissance Festival and the rum tasting competition with a goal to be the best in the world. Now, Rum Week is full of great events from competitions to seminars to VIP parties and lots and lots of rum tastings. Great cocktails made by great bartenders will be flowing all week.

How is this year’s Rum Renaissance going to be different from last year? Bigger and better right!

We’ve doubled in size every year. At the Shore Club we started with about a thousand rum enthusiasts in 2009. At the Raleigh Beach Resort it was about 1,900 in 2010. Last year at the Deauville we exceeded 4,600. I see a lot of people convincing their friends to attend and more people from the beverage trade are coming around. Last year we had 12,000 square feet of exhibit space and this year we’re moving up to 20,000 and it’s sold out. There are more VIP parties every night of the week, starting Monday evening, April 16 at the Broken Shaker, plus late night events at the Liar’s Club pop-up bar in the Deauville Jazz Club. Late on the weekend, it’s Mod Miami parties for swanky urbanite swingers. The world-famous UK tiki team is coming from England to challenge the best tiki bartenders in the U.S. to another duel. That’s a friggin’ riot and a half. Don’t miss it. It just keeps getting better.

When traveling, I usually test a bartender’s skill by ordering a Daiquiri. I rarely get a good one, which is ironic since it’s just lime juice, sugar and rum. I’m a sucker for great cocktails made by great bartenders, and I’m pleased to say I’ve had quite a few. A well-made Rum Old Fashioned is pure bliss. A good tiki drink like a Zombie or proper Mai Tai is the bomb. I’m also a big fan of rum punch when it’s made with skill and panache.

Why do you think rum’s popularity has grown in recent years?

Rum is fun. Rum was ready to be re-discovered. More good rums are on the shelf. People love rum flavors. Good cocktails are coming back into style. Rum is a sailboat, a hammock, a palm tree, a beach and a waterfall next to a pool. There’s a bit of pirate in all fun-loving  boys and girls. Rum is unpretentious, it’s accessible and it’s not expensive. All these factors have contributed to the renaissance of rum, not to mention folks like you and me and many of our online friends blabbering about it incessantly 24/7. The bottom line: when people try good rum, they like it. Rum cocktails are fun and we all need to have good fun with friends and family because life is too short.

If people would like to attend the Miami Rum Renaissance, how do they sign up? Can they just do some events and not others?

Yes, most people will choose to attend the Grand Tasting events ($40 in advance, $50 at the door) on Saturday and Sunday, April 21-22 from 1 to 7pm where they can sample hundreds of great rums from the Caribbean and beyond. The variety is amazing. Some world travelers and professionals will choose the VIP pass ($250) with full access to all the VIP parties and special events all week. If you can handle a week of rum theme parties, get a VIP pass. Sometimes it’s possible to buy a single ticket to a VIP party for $45, but usually they’re sold out well in advance.

Last question. If you’re marooned on a deserted island and could only have 3 things with you, what would they be?

Hopefully, I’m marooned with a large portion of my substantial rum collection and an ice maker. A couple of tumblers and a shaker, maybe a machete to crack open the coconuts and I’ll be a happy man. Of course, I’d need some company, so I’ll be sure to travel with my wife and a few friends who are good at making radios out of coconut shells and aluminum foil like the professor on Gilligan’s Island. 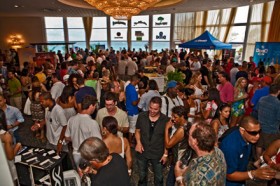 Thanks Robert! If you’d like to go to the Miami Rum Renaissance, go to www.RumRenaissance.com for tickets and more information.