My Interview With Jon Anthony & Mark Tamburino of No Shoes Radio There are great jobs then there are great jobs. Being a DJ for Kenny Chesney’s No Shoes Radio might just take the cake. Jon Anthony–the original Mr. Golden Voice–and Mark Tamburino–the free spirited singer/songwriter that everyone calls Tambo–are the two guys that captain the ship known as No Shoes Radio. Let’s raise anchor and go for a ride with Jon and Tambo to find out a little more about what makes their world go round.

What makes being a DJ on No Shoes Radio (NSR) so crazy cool? If you don’t know the answer to that question then you’re not a listener. Jon and Tambo travel the country with Kenny Chesney. They load up in their NSR golf cart and hit the parking lots before the concerts to meet the fans and take part in the crazy party atmosphere. They will often record and even broadcast right from the lots to give NSR listeners a taste of the tailgating party. A good gig…I think so.

NSR listeners get to know Jon and Tambo a little through their radio broadcasts and meeting them out in the parking lots, but I thought it would be fun to find out a little more. So I put on my Barbara Walters wig and shot some extremely difficult and personal questions across their bow. Dateline eat your heart out! Okay, so the questions are more relaxed and fun, what did you expect from a Caribbean writer? I was serious about the wig though, it looks good on me.

My Interview with Jon Anthony and Tambo of No Shoes Radio

1. The Brothers of the Sun tour is hitting its stride, Welcome to the Fishbowl recently dropped and you guys get to hangout at the biggest tailgating parties each weekend, can the life of a No Shoes Radio DJ get any better?

T: Hey, it’s great work if you can get it!
J: I agree, this IS the best radio job in the world!

2. All of the NSR and Chesney fans hear you guys on the radio all the time, but how well do we really know you guys. John can you tell me one thing about Tambo that we might not know? Tambo, can you tell us one little thing about John that would surprise us?

J: Wow, that’s a loaded question! (laughs) But I think the world might be surprised to know that Tambo is truly a romantic.  He definitely knows how to party and have a great time, but he also appreciates the soft touch of a slow woman!
T: People don’t know that Jon is a semi-professional weather man-wannabe … and has an addiction to caramel corn!
J: Ha! (laughs) Uhhh, that’s an inside joke that we won’t talk about!

3. NSR fans know how to have a good time. The parties are fueled by free flowing Corona and rum drinks. When you guys like to blow off some steam what are your cocktails of choice? No vodka drinks!

T: Other than a filthy, dirty, naughty Ketel One martini with extra stuffed blue cheese olives — which apparently I can’t choose here — another party favor of mine would be top, top, top shelf tequila shots with baby Mexican Coke chasers.  Or a choice Pinot Noir — it’s the most delicate of all the berries.
J: Wow, I’m thirsty now!  For me, I’m always chilling backstage or on the bus with either an ice-cold Corona or a Malibu & Coke.  I’m apparently not as sophisticated as Tambo!
T: Stick with me, kid, you’ll learn!  (laughs)

4. Tambo, there’s a sound byte on NSR of Kenny describing how he pulled you on stage last year at the Meadowlands to sing in front of your home town crowd, can you tell us what that felt like? What song(s) did you sing and take us through the experience? Must have been surreal!

T: I sang “Blister In The Sun,” and the one thing I do remember from it was, in the middle of the song, when Kenny was talking to the crowd, I was down on my knees on the catwalk and looked all around and it kinda hit me right then that I was actually singing at the Meadowlands.  I mean, that’s some pretty heavy company there — Springsteen, Bon Jovi, U2, the Police, and several rock festivals, let alone growing up watching the Giants and the Jets play there my whole life.  To think of going from seeing that place on TV from my grandfather’s living room as a kid, and then standing there in the middle of it was pretty surreal.  And the coolest part of it all was that, in the next day’s review in the New York Times, they included my appearance as one of the highlights of the show.  That’s really, really cool and a moment I’ll never forget, thanks to my big brother Kenny.

5. John, I’m going to show you a little man love and and say you have the most perfect radio voice. I’m sure a lot of NSR listeners would agree. How long have you been in radio? What did you do before NSR? How did you get the NSR gig?

J: Oh, jeez, a “radio” voice?!  I appreciate the kind words!  I’ve been in radio my whole life, starting at age 15.  I won’t bore you with the details of my radio career, but NSR was born during my time as VP/Country Programming for XM Satellite Radio.  We had it on XM for three months and it was such a huge hit, Kenny, Tambo, and I decided to take it to the world via the internet.  And here we are!
T: He’s also got the perfect face for radio! (laughs)
J: (laughs) Gee, thanks, Tambo…
T: But seriously, he’s one of the best voices in broadcasting. 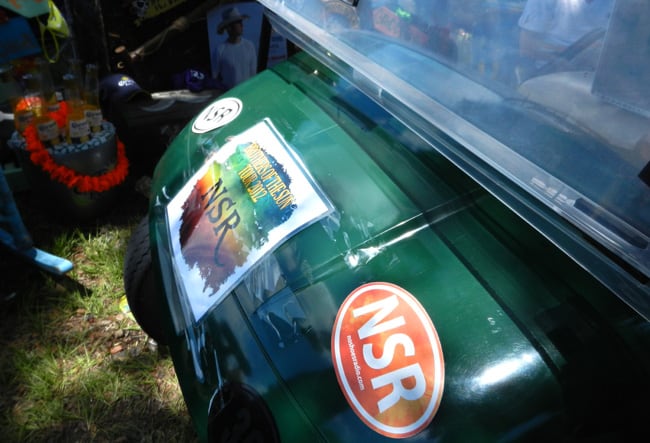 6. Tailgating at Chesney shows has become part of the concert experience. It seems like each city tries to out do all the others. You have guys like Rusty Smith and the guys who built the Tambo Tower who push it to another level. But if you had to pick, what city has the best tailgating environment? Which ever one RumShop is at right!

T: Wow, that’s like trying to pick your favorite child or your favorite song or your favorite relative.  I mean, I love the Rocky Mountains as much as I love a sandy beach.
J: I agree with Tambo — they’re all great because they all have their own flavor, but for me, being able to tailgate on a boat in Pittsburgh is really, really cool.  That’s so unique and the fans there really throw a hell of a party.  But again, we really have a blast EVERYWHERE we go.

7. Some of Chesney’s music and a lot of the music you play on NSR has a lot of the island escape vibe to it. If each of you guys had to pick one island in the Caribbean to sink your toes into and escape, which one would it be?

T: Well, there’s a little place that we’ve just discovered way down on the western edge of the Caribbean sea.  One of our NSR engineers, Jaime, has a little piece of land on a place called Little Corn Island, right on the water.
J: Yes!
T: It’s kinda isolated, but I think that’s what makes it so amazing.
J: Yeah, we’ll do a live broadcast from there someday and introduce the fans to it.

8. If you had to pick one song on Welcome to the Fishbowl as your favorite, which one would it be and why?

J: “El Cerrito Place,” hands down.  I loved that song when Charlie Robison cut it, but I really think Kenny took it to a new level with Grace’s vocals and the whole instrumentation of the song.  It’s definitely one of my all-time favorites already.
T: I’ve got two favorites.  “Makes Me Wonder” because I love what it says, the picture the song paints, and the song’s groove.  “Always Gonna Be You” is another fantastic song.  And damn, I wish I’d written both of ’em! (laughs)

9. If a blonde country cutie got her hands on your….iPod, head out of the gutter guys–what type of music would she find on it?

T: It’d probably scare her! (laughs)  Everything from the Beatles, the Stones to Iggy & The Stooges, Jane’s Addiction, Smashing Pumpkins, to Gordon Lightfoot — and everywhere in between!  A lot of jazz, Marley … and the Rocky Horror Picture Show Soundtrack!  (laughs) Oh, oh — and Tony Bennett!
J: I know this sounds self-patronizing, but for me, I listen to pretty much everything you hear on NSR.  That’s why I love this job so much … it’s truly my favorite music all wrapped up into one.

10. I’ve watched NSR and its following explode. What does the future hold for No Shoes Radio?

J:  Global dominance!  (laughs)
T: Yeah, man … the new benchmark in radio!
J: I love that!  That’s our new tagline. (laughs)  We’re just having a blast meeting all our new friends and fans and we hope to keep doing it year after year.

11. Last question – If you guys were stranded on a beautiful tropical island in the middle of nowhere and you could only bring 3 things with you, what would they be?

T: My guitar (with extra strings), my iPod/recorder, and one of the coolest ladies that I could possible imagine to float off the island with.  The most important of these is the lady — she’s gotta love the Beatles.  Seriously, I once broke up with a girl who didn’t like the Beatles!  As the French would say, she’s gotta have that certain “je ne sais quoi!”
J: For me, I’d have a boat to enjoy the various waters off that island, a cooler full of adult beverages, and a satellite phone.  Hey, I’d only enjoy the solitude for so long!

A couple fun loving guys doing what they love to do. If that’s not living THE LIFE then I don’t know what is. I want to thank Jon and Tambo for doing the interview. I really appreciate it, I think it gave all the Castaway readers a little peak into the lives of the on-air personalities of No Shoes Radio. Big ups to the behind the scenes NSR team as well, you guys know who you are. I have a few Corona waiting with you’re names on them.

If you’d like to meet Jon and Tambo your best chance is at one of Kenny Chesney’s concerts. Follow the No Shoes Radio Facebook page and see where the tour has landed and where the NSR team will be.

You can listen to No Shoes Radio on: