Beaches are fantastic, they relax the soul and offer beautiful vistas. Another thing that makes beaches so wonderful is the wildlife that calls them home. The transition from sea to land is home to all sorts of critters; dolphins, crabs, sea birds, bait fish, pale-white tourists, all these things can be found on or around the beach. This story is about one particular bird, a friendly White Egret whom we will call Earl. (Thank you Castaway Marianne for the name!)

There I was, laying flat on the sand and shells of Bonita Beach shooting pictures of sexy rum bottles and colorful Castaway Koozies. At least a dozen people came up to me and asked if the bar was open, joking that they would help me drink all the rum and Kalik I was using for the photos. I smiled and said I’m open if they were paying. Everyone laughed and moved on. Everyone that is except for Earl.

Earl the egret landed about 20 yards away near the waves. Nothing out of the ordinary, dozens of birds did the very same thing throughout the day and moved on. Earl was different. After he landed he slowly walked his way up to my make shift photo studio. These egrets often hang around fisherman hoping for a free snack of bait fish, but a fisherman I am not. No pole, not bait bucket, no net, and not really even close to the water where a person fishing would normally be. This lead me to only one conclusion… Our kind of bird right! Earl casually walked up to about 15 feet of me and just hung out. His eye glued to me like lasers as I went about my work. I in return kept my eyes (and lens) locked on him. I asked Earl what he was up to and told him I didn’t have any fish. He really wasn’t the talkative type. He just stood there and cocked his head sideways, just like a dog would do, every time I spoke to him. I’m not sure if he was waiting for a rum hand out or wanted to do some modeling. I stood my ground on the “No Rum To Shorebirds” policy, but did stroke his ego by shooting some bird style glamor shots for him. The communication barrier between the two of us was a steep one, but one thing was clear, we both had respect for one another. I admired, even envied, him for being able to fly above the waves, eat seafood all day and call the shoreline his home. I think Earl respected me because I loved the beach as much as he, I had rum and might share it and that I had no interest in eating him. 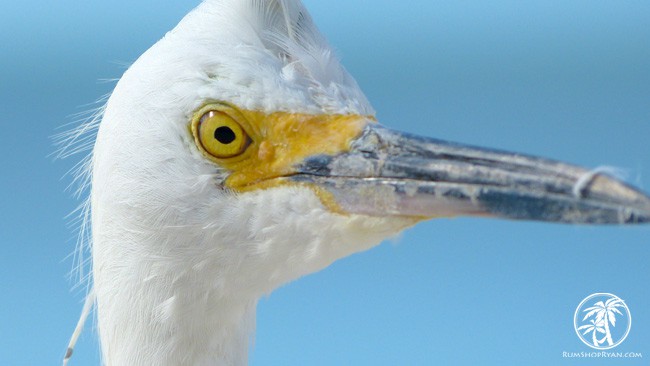 Earl hung around for about 15 minutes. He finally flew off when I tried to put a Castaway Koozie next to him for a photo. I think the fact that I wasn’t going to share the rum pissed him off and he had no intention of modeling for free. I don’t really blame him. I would have been out of there too.

If you happen to be in the Southwest Florida area, relaxing on the beach with a cold rum drink in hand, be on the look out. A quirky little egret may land next to your chair and start eye balling your drink. If so, give him a head nod and tell him RumShopRyan says hello. Just a couple brothers under the sun.