Visiting Guadeloupe: What You Need To Know

Visiting Guadeloupe: What You Need To Know

This is a guest post about the Caribbean island of Guadeloupe from Alexandre Duval, a blogger for ViaRail.

The Caribbean is a region of the world that is overwhelmed with sunny islands. Located southeast of the Gulf of Mexico, the Caribbean is undoubtedly a perfect spot to relax in a warm climate. Although the region’s most famous destinations for tourists include Cuba (non US) and the Dominican Republic, other lesser-known places are worth a detour. Among them is Guadeloupe, a French overseas department whose territory totals some 1,600 square kilometers.

Although Guadeloupe is relatively small, it remains the largest archipelago of the Lesser Antilles. Guadeloupe is comprised of two main islands (Basse-Terre and Grand-Terre, which are shaped like the wings of a butterfly) as well as the nearby islands of Les Saintes, Marie-Galante and La Désirade. Altogether, these islands have a population of just over 400,000 individuals, which makes Guadeloupe the 7th largest territory in the Caribbean.

Since Guadeloupe is an overseas department of France, its “capital” – the city of Basse-Terre, not to be confused with the island that bears the same name – actually is a “prefecture”. The city of Basse-Terre, with its 12,000 inhabitants, is not Guadeloupe’s largest town, though. This title is in fact owned by Pointe-à-Pitre, which is located on the island of Grande-Terre.

More than 80% of the tourists who make it to Guadeloupe come from France, and another 10% come from other European countries. Visitors from the United States and Canada only represent some 3.5% and 1.5%, respectively. This means that tourism in Guadeloupe remains quite largely “intra-national”, which actually sounds weird since French visitors from metropolitan France actually have to cross the Atlantic Ocean…

Caribbean lovers, however, should definitely give Guadeloupe a try. Indeed, the French department’s islands are tremendously gorgeous! Not only are they endowed with unique turquoise water and fine sand but they also offer a wide range of possibilities, from beach activities to nature observation, going through sports such as hiking and traditional culinary experiences.

Basse-Terre, which is the west island of the “butterfly wings”, is capped by an active volcano called La Soufrière. Not only is La Soufrière the highest peak (1,467 metres) in the Lesser Antilles, but it can also be climbed by tourists who wish to live a unique hiking experience. Basse-Terre offers amazing panoramas, thanks to its tropical forest (which officially is a National Park), waterfalls, luxuriant vegetation and beaches. 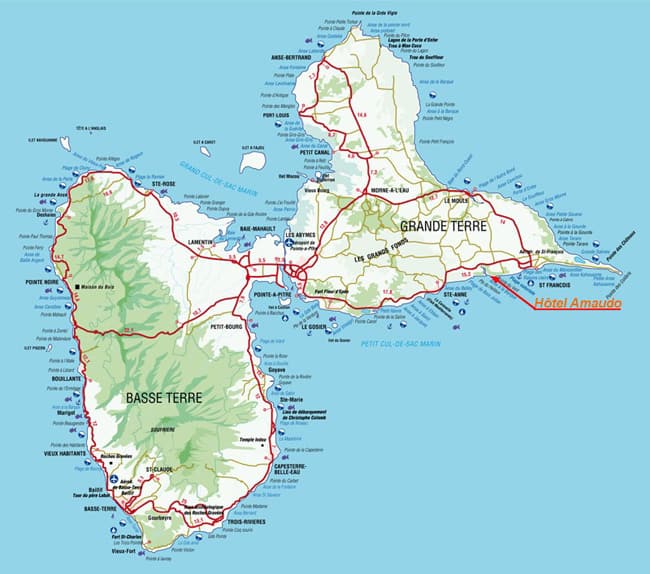 As to Grande-Terre, it offers a wider range of activities, from bars and casinos to turquoise waters and pristine beaches. Many of the island’s restaurants offer quality, traditional Créole cuisine while Guadeloupe biggest city – namely, Pointe-à-Pitre – has interesting monuments to see and nice places to visit. It ought to be noted that Grande-Terre, which sits on a limestone plateau, also has perfect conditions for intense sugar cane-growing.

Sugar cane also is grown on the island of Marie-Galante; plantations actually occupy more than half the land of Marie-Galante. This agricultural activity together with local expertise produce among the best rums on the planet in three different distilleries: Bellevue, Bielle and Poisson. Marie-Galante’s inhabitants are renown for their warmth and authenticity and for that reason, many say that one doesn’t really go to Guadeloupe unless he or she goes to Marie-Galante. 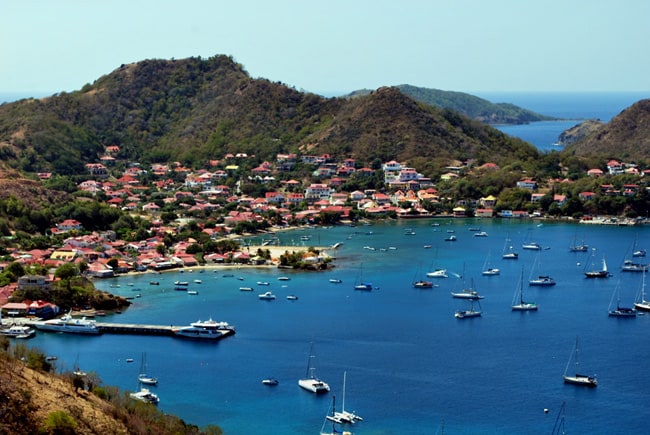 Les Saintes are composed of two small inhabited islands and seven islets. They hide colourful streets, houses, fishing boats as well as one of the world’s most beautiful bays. As for La Désirade, it is now classified as a natural reserve, a fact that has recently fostered ecotourism in Guadeloupe. For the diversity of the activities it offers and the peaceful islands it consists of, Guadeloupe should definitely be seen by Caribbean addicts!