Recap From The Tortuga Music Festival

Recap From The Tortuga Music Festival

The two day Tortuga Music Festival took over the sand of Ft. Lauderdale beach this past weekend. Three stages and over 20 different artists entertained thousands of people, all with their toes in the sand. I was able to attend the event Saturday to capture it for those who couldn’t be there.

We pulled into Ft. Lauderdale just as a band of thunderstorms and heavy rain hit the area. Not usually a good thing for an outdoor music festival. The dark rain filled skies cleared mid afternoon on Saturday giving way to the warm Florida sun though. The bikinis and trunks came out, the Landshark Lager flowed and life was good.

The first act I saw was Mac McAnally, the wildly talented singer songwriter and member of Jimmy Buffett’s Coral Reefers band. His songs tell fascinating stories that bring the listener right in. This was my first time seeing Mac perform by himself and it was a real treat. The next artist that I saw was Michael Franti & Spearhead…wow, I’m glad I did. I love Michael’s blend of reggae and rock but had never seen him in person. His high energy show had the entire crowded jumping up and down in the sand, waving their hands in the air, and loving ever second of it. If you ever get the chance to see him perform. I highly recommend it.

Later in the night while waiting for the Chesney show to start we saw Michael Franti hanging out in the crowd taking pictures and just having a good time, just like everyone else. Then after the Chesney show, Shawn from Coastlines & Tanlines and I were at Quaterdeck’s restaurant and Franti came in and was chilling with what looked to be his family. I gave him a fist bump on the way out and thanked him for a great show. Pretty damn cool. 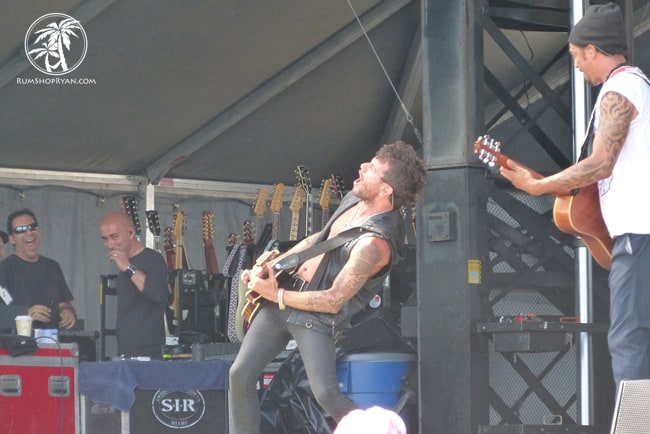 The headlining act for Saturday night was Kenny Chesney. What else can I really say that hasn’t already been said about a Chesney show. It was high energy, amazing songs and another great performance. This was my first time watching a Kenny show on the beach though. The fact that sand was under my feet and the Atlantic Ocean was the background really made for a especial experience. I didn’t stay for the musical acts on Sunday. I really did want to watch Grace Potter, The Wailers and Eric Church but I was exhausted from the day before and I had to get back to get this story ready for you guys! I got a lot of great video footage that I’ll put together into some sort of montage. More to come!