Caribbean Beers – Remember The Islands By Taking A Drink

Yes the Caribbean is famous for its rum, and deservedly so, but sometimes there’s nothing like an ice-cold refreshing beer to beat back the tropical heat. The islands aren’t known for their beers, in fact I’ve heard plenty of people complain about how all the beers in the Caribbean are light, tasteless and indistinguishable from each other. I can see how some people would say this, but I also disagree. Just because something is light, yellow in color and isn’t punching you in the face with hops and barley doesn’t mean it’s a bad beer.

I’m definitely no beer snob, I will take a smooth Red Stripe, Corona or Kalik over a fancy German or Belgium beer any day. Why? Because that’s what tastes good to me and and these beers have memories attached to them. When I drink a Carib, Sands or any other Caribbean beer it instantly takes me back to my time on that island. No fancy European beer can do that.

I was going to do a list of the “Best Caribbean Beers,” but that is such a subjective thing, everyone has different tastes. So instead I’m going to list a bunch of island brews that I’ve enjoyed and you can tell us below what brew is your favorite, or which beer has the best Caribbean memories attached to it for you. Not listed in alphabetic order because I’m crazy like that, here we go!

Anyone who has spent any time in the USVI I’m sure has had a few beers from the St. John Brewer guys. Their line of beers are full of flavor and buck the stereotype of light flavorless island beer. With flavors like Tropical Mango, Island Summer Ale, Liquid Sunshine and Island Hoppin’ IPA–St. John Brewers are a craft beer company that made the USVI its home. Which one is your favorite? 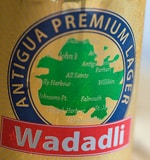 The national beer of Antigua is Wadadli beer, an alternative name for the island itself.  It is brewed by Antigua Brewery which brews a few other Caribbean beers. I’ve only had this one once so I can’t comment a great deal. What do you say? Caybrew, CayLight, White Tip and Ironshore Bock are all products of the Cayman Island Brewery LTD. Their beers have won many awards and are very popular in the Caribbean. I have not yet visited the Cayman Islands, but Florida is lucky enough to get a nice selection of Caribbean beers every now and then. I’ve had Caybrew several times and enjoyed it thoroughly. Presidente is a brand of Pilsner owned and produced by Cervecería Nacional Dominicana at several breweries in the Dominican Republic. Believe it or not, I’m not a fan of Presidente. For whatever reason it gives me a headache every time I drink it. If you see me with one in my hand, slap it out!

Balashi Beer, an all-malt pilsner, is the national beer of Aruba. I’ve never had it. I want it. I’ve emailed them. They won’t respond. Don’t they know who I am!

Hairoun – St. Vincent and the Grenadines

Ahhhh Hairoun. I remember sitting at the Frangipani restaurant on Bequia, all by myself chatting with the bartender. I enjoyed a few Hairouns, watched a guy open coconuts and took in the vista that is Admiralty Bay. I wouldn’t say it’s the greatest beer, but then again it might have been the best I’ve ever had.

True story, I’m drinking a Kalik Gold as I write this story. Liquid inspiration. I’m a big fan of both Kalik and SANDS and to this day the “Kalik VS. SANDS – Which is better?” post is one of the most visited stories on RSR. I love them both, I drink more Kalik at home because its easy to get, but when I’m in the Bahamas I always drink SANDS, we can’t get it in Florida so I indulge.

The man’s beer. My first couple days on St. Kitts I was drinking Carib, then Lavern at the Marriott Resort told me about Skol. She informed me that Skol is the man beer on St. Kitts. Well, I’m a man, so I guess I need to drink Skol! It wasn’t bad but wasn’t great, I resumed my friendship with Carib after a day or two. 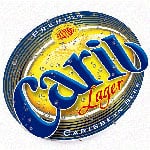 Carib is known as the beer of the Caribbean. You can get if pretty much on any island and also here in south Florida. I love this beer because it is refreshing, its light, and you know what you’re going to get when you take a sip. I’ll take one any day of the week. I want to thank Monja of Grenada Explorer for the awesome Carib hat she got me in Grenada! Cheers!

Jamaica, haven’t been there. I know, what Caribbean travel blogger hasn’t been to Jamaica! Feel free to slap me in the face next time you see me. I feel as if I’ve been there by the amount of research I’ve done and Red Stripe that I’ve drank though. Red Stripe could also be considered the beer of the Caribbean along with Carib. Mass marketed to the US with their, “Hooray Beer!” campaign, Red Stripe is a little bit of paradise in a bottle. I do have one complaint though. At only 11.2 oz. per bottle I feel a little short changed. You can definitely tell you’re getting less beer when drinking one of their short squatty bottles. So many times I’ve picked up the bottle, raised it to my lips for another drink and boom, it’s all gone. Son of a B! Barbados is home to the Banks Barbados Brewery, which brews Banks Beer, a pale lager, as well as Banks Amber Ale. Again I’m a little spoiled because we south Floridians can get Banks in a few different local stores. I enjoyed Banks and will gladly raise my bottle to Barbados. Keep making that good beer!

This is a Caribbean beer I have not had. I asked an expert about it, Mr. Bob Davies who has lived in the TCI for many years, and he said it was s**t. Well that wasn’t the greatest of endorsements, but I’d still like to do a taste test myself. Click the name above and you can read what Steve from Uncommon Caribbean had to say about the Turks Head. I’ve never been to the Turks & Caicos so the beer has eluded me, I’ve flown over the islands many times and each time I wanted to jump out of the plane to do some exploring.

Here are some other Caribbean beers that are note worthy. I’m sure I’ve missed a few so feel free to hit us up on Instagram at @CaribbeanCastaways and let us know. Also let us know what your favorite Caribbean beer is. We always recommend people drink local and experience the flavors of the islands. There’s no reason to order a Bud Light in The Bahamas, Aruba, or anywhere else in the Caribbean!

And before we go, if you are a fan of Caribbean beer, Amazon has some cool stuff! Check it out here.