I was sweating like a beast under the Caribbean sun, sitting on an aluminum guardrail at the top of a hill on St. Barts. My camera was poised and ready, waiting for planes to perform their aerial ballet of flying down a step hill and pulling up at the last second to land on an extremely short runway. If the pilot’s timing is off, they could end up in the water on St. Jean Beach (pronounced St. John and Baie de Saint Jean in French), this beach was my hiking destination and the star of this episode of Island Lime Videos.

St. Barts isn’t a huge island, the walk from Gustavia to St. Jean beach took about 20 to 25 minutes, though it was up and over a good size hill. Even in March, the Caribbean heat loves to show off, this Castaway was soaking wet and in need of an ocean cleanse and a cold beer.

After watching a few planes master the tricky island landing I made my way down to the end of the runway and the entrance of St. Jean beach. This is where I set up the camera and filmed the neon blue water washing ashore on powder soft sand.

No music, no voice-over, no bells and whistles–just you, the water, and the sound of the waves. That’s what an Island Lime Video is all about. This is St. Jean beach.

As with most French islands, topless sunbathing is no big deal. Honestly, it’s not a big deal to me either, but factor in a camera and people’s perception, and one gets a little self conscious about being “That Guy.” On St. Barts I was careful not to be “That Guy,” so I made sure to film the videos quickly and well away from the au naturel sun worshipers. 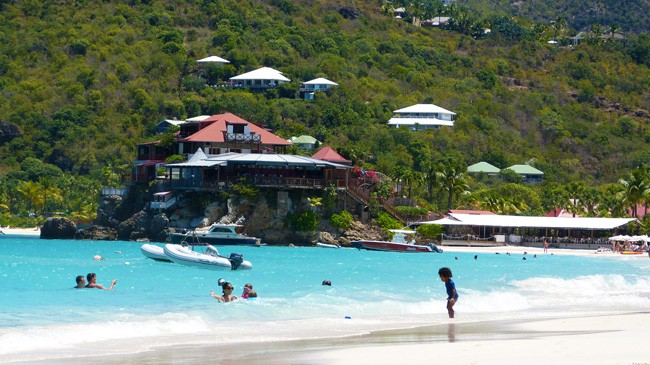 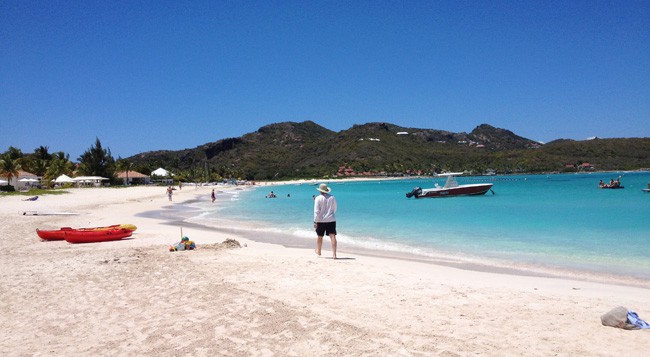 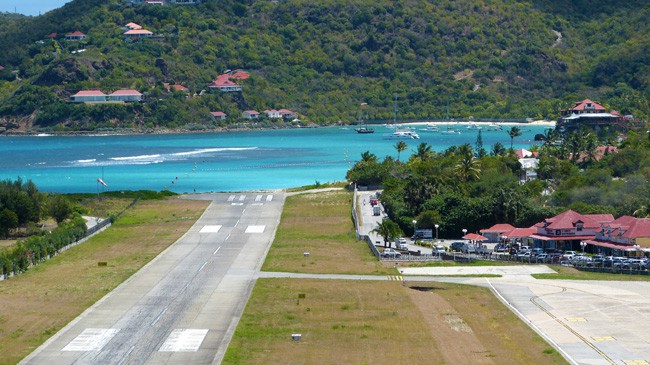 I was only able to spend maybe an hour on St. Jean beach, their was still so much to do and see on this gem of an island. I did slow down long enough to enjoy a couple cold Caribs at La Plage restaurant at Tom Beach Hotel. The setting was stunning as I huddled under the shelter of the small beachside bar. I watched as attractive servers brought out live lobster to sell to guests and marveled at the sheer beauty of the place. Everything was gleaming white and upscale, a stark contract to most Caribbean beach bars. I sat there soaking every second in, wishing that I never had to leave. After the refreshing beers I continued down the beach where I ran into Bernie and Alan, my Canadian friends and fellow shipmates from Sagitta. They described their day to me and informed me that the world’s best bathrooms were on this beach. I couldn’t help but laugh at their bathroom excitement and had to investigate myself. After those few Caribs it was about that time I find one anyways. Bernie and Alan point me towards Eden Rock Resort and gave me very specific bathroom directions.

Indeed the bathrooms by the parking lot at Eden Rock were fancy. Expensive art covered the walls, a stylish red toilet seat, and French flair. I took a picture of this masterpiece of a bathroom but can’t seem to find it. That describes my short time at St. Jean beach on St. Barts. It’s a pure paradise, one that I definitely had to share with you through this Island Lime Video.

(This video was made possible by Island Windjammers and the tall ship Sagitta.)

Please Subscribe If You Love The Caribbean!
Subscribe to Daily Updates
Facebook.com/RumShopRyan
Twitter.com/RumShopRyan
RumShopRyan YouTube Channel
Caribbean Pinterest Boards
RumShopRyan on Google +
P.S. - Leaving soon? Use the links below to book your trip: We use all the companies listed here or on the resource page. By booking through these links, the small commission we earn helps us bring you more Caribbean content so that you can save money and have a better island vacation. Crystal and I greatly appreciate any support!