Currently happening: a Blue Chair Bay Coconut Rum and pineapple sits to my right, Chesney’s Anything But Mine is streaming through the speakers, a pirate girl is preparing to raise sail to come see me, and I’m typing this run-on sentence. This grand mood I find myself in is being blown forward by a specially concocted beach playlist.

I’ve said it before, nothing outside of chemicals can alter your mood like music.

Music instantly transports you to a place of fantasy or past memories. I remember dancing to Jake Owen’s Beachin’ on the bow of a catamaran anchored in White Bay JVD, or sailing up to Waterlemon Cay, St. John as Chesney’s Be As You Are flowed through the air. Those experiences are burnt into my salty noodle like a half thought out tattoo.

Every time I hit the beach, whether it be in the Caribbean or here in southwest Florida, there’s a beach playlist ready to lend itself to real-time memory making. My question to you is, what’s on your beach playlist?

The Tortuga Music Festival is just a month away and my excitement level is building like an action movie. Kenny Chesney, Zac Brown Band, Jake Own and a host of other bands will being rocking the sand of Fort Lauderdale Beach. Is there a better place to see Chesney and Zac Brown than on a beach? I think the hell not!

So to answer the question I posed to you, here are some of my favorite beach playlist songs. I’m a member of No Shoes Nation so don’t be surprised if a lot of them are KC inspired. There’s 485 songs on my Beach Playlist, the list below is some I just can’t live without. This list could literally go on forever, but these are some of my favorites. Some of which will be played at the Tortuga Music Festival.

Currently happening: my rum and pineapple is empty. I’m inspired to tell you a story about the power of music. The setting, anchored off White Bay in the BVI. 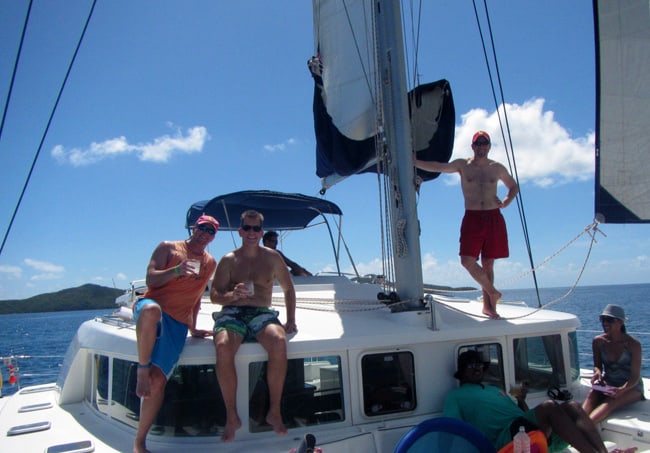 I think there was about a dozen of us Castaways, maybe more, all sitting on the trampoline of a Lagoon 44 cat. The only light was from the twinkling stars and the swaying mast. Shawn of Coastlines and Tan Lines pulled out his guitar and starting strumming away with When I See This Bar, by Mr. Chesney. We all sat there underneath the Caribbean stars, anchored in a sea of bliss. The group was collectively lost in the music, lost in the surreal nautical atmosphere. You could tell a moment was happening.

We sat there quietly, nodding our heads to the seductive lyrics that fit the beach bar scene we indulged in all day. Then came the climactic ending…

“That’s what I see when I see this bar.”

I sang out those lyrics as the accompaniment goes in the song. Shawn would go, then I would go. Like I said, it was a moment. Neither one of us can really sing, but that didn’t matter. It was all about the music, the island setting, and the feeling… 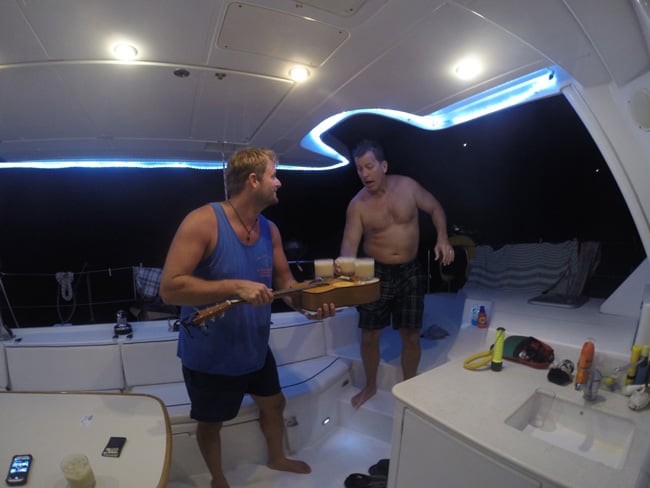 Leave a comment below and give me your top 10 Beach Playlist songs. It’s nearly impossible to pick just ten I know, but give it a shot.