Part 2: A Trip That Wasn’t – Lessons Learned on the High Seas

…And the conclusion of A Trip That Wasn’t.

If you are just joining in, you can read about Part 1 right here.

Grab a life jacket, the seas get a bit rougher!

We woke early and prepared for our passage taking us to Staniel Cay and Big Majors. The winds were still blowing 15-20mph from the NE but we were traveling south on the shallow lee side of the Exuma island chain. So the water was fairly calm and we were cruising with the with the wind and waves for the most part. The water glowed electric blue as we watched the islands pass by.

It took us only about 4 hours to reach the picturesque and protected anchorage of Big Majors. Big Majors is home to the famous Pig Beach. A bucket list item for many, including miss Castaway Crystal. It’s a cool place, I tend to prefer my pork on a plate instead of the beach, but hey it’s just one of those places that has to be experienced.

We loaded up the dinghy with apples and carrots and went to say hi to the inhabitants of Bacon Beach. We had the beach all to ourselves which is rare as it’s a big tourist attraction. The pigs were a little aggressive with the food as they stole the whole bag of carrots from Crystal and were a little pushy with the apples. I’m guessing that because of the hurricane they didn’t get the heavy dose of tourists feeding them as they usually get. 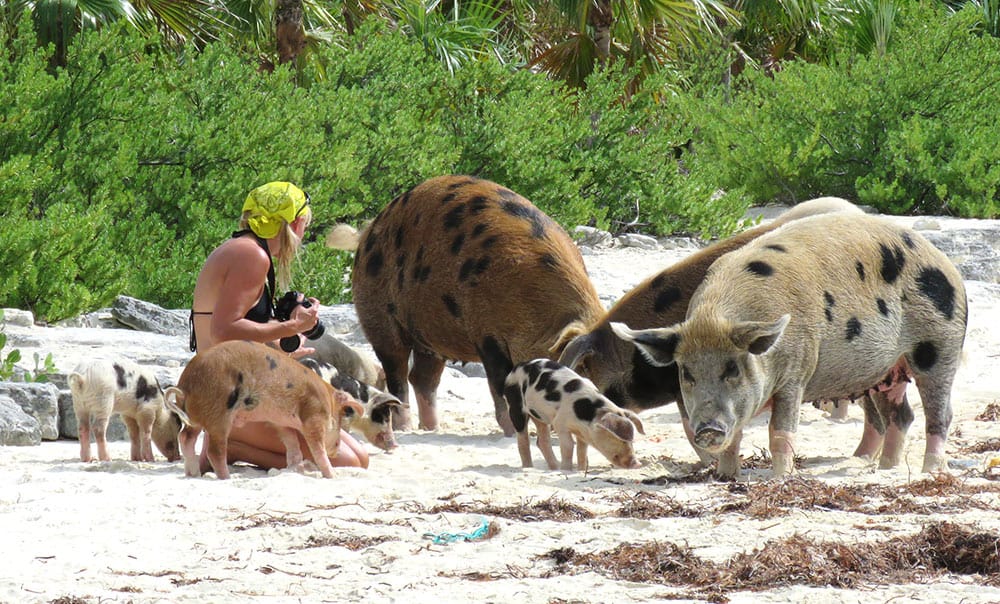 That guess was confirmed later that night at Staniel Cay Yacht Club as we met a lady who was bitten on the ass by one of the pigs. She had no problem showing us the bloody photos of her back side either. Ummm…another drink please bartender!

We woke in the morning to the same 15-20mph NE winds that have been blowing for the past week. Because of the wind, and the waves  it would create in the deep windward side of the Exumas, it was determined that we would NOT be unable to make the passage to Cat Island or get to any of the other southern Bahamas islands. When boating the weather dictates your movements. This time it dictated that it wasn’t going to let us leave the Exumas. It may sound like a pleasurable detour and place to be stuck, but when you had so much built up in your head and special moments planned, it’s a tough pill to swallow.

As you can see, cat lover Castaway Crystal wasn’t happy we were not going to make it to Cat Island. 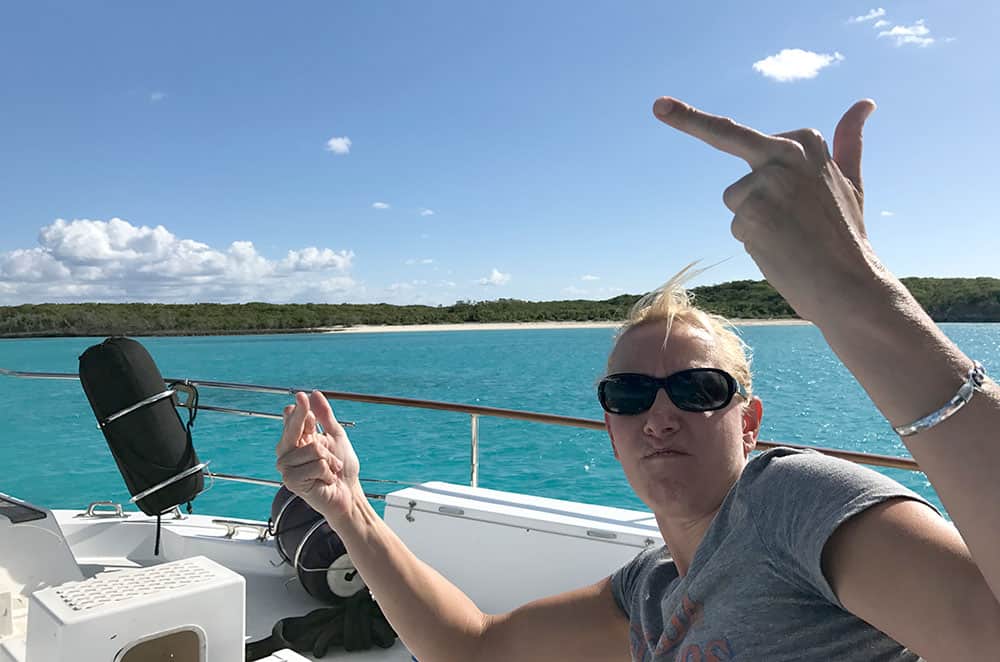 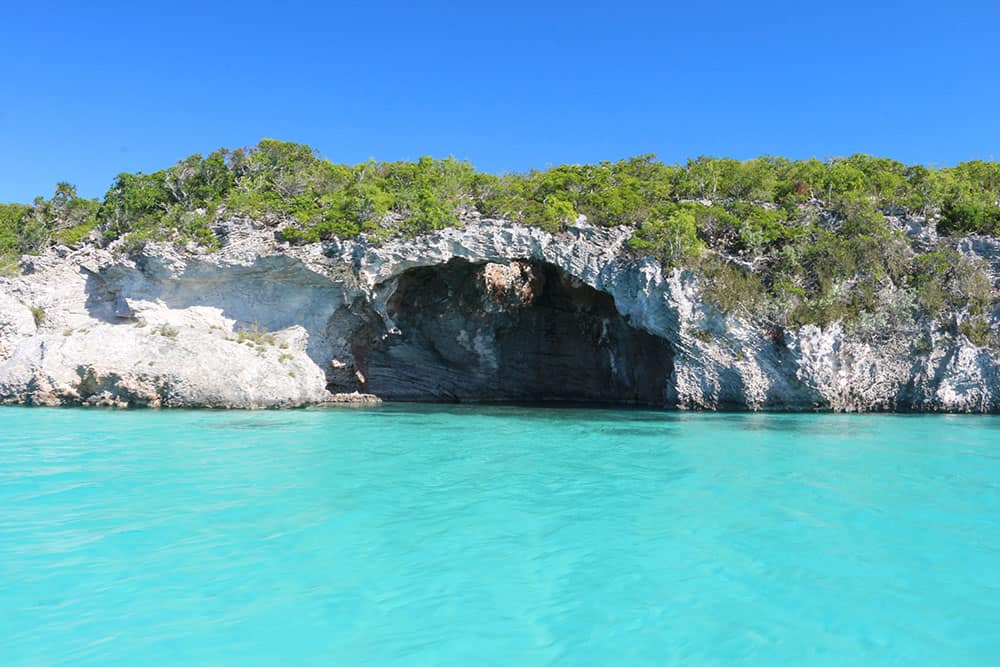 We ended up motoring south past Musha Cay and anchoring at Rudder Cut Cay. Here we took the dinghy out and explored a private beach and snorkeled the underwater sculpture of the Mermaid and Piano. The water was stunning, but the mood had definitely changed. For one we knew we were going to see all the other Out Islands we were dreaming of, and two, we were going to have to venture out into the deep rough water on the windward side of the islands in order to get to the protection of Elizabeth Harbour and down on Great Exuma. Captain told us conditions would be similar to what we experience crossing the Gulfstream…not fun.

Time to buckle up. The goal was to raise anchor right around sun up so that we would beat the heaviest winds of the day. We headed for the narrow cut on the south end of Rudder Cut Cay which would lead us out into open water. The cut is narrow and has a sharp shelf from the deep water. Translation…when the wind is blowing lots of water into a shallow and narrow area it has to go somewhere…it goes up.

In the span of about 3 minutes we went from calm 1-2ft seas to 10-11ft seas. The waves where coming fast and were packed really tight. You really have no choice, just turn into them and keep the vessel from going sideways or bouncing off the nearby rocks. Mermaid Tales pitched up sharply, then just as quickly the bow drove itself down into the bottom of the wave. As this happened, because the waves were packed so tightly, the next 10footer crashed over the entire bow of the boat. We buried the bow two times, almost three times during our time in that cut. Once we cleared the cut, the 10-11ft waves calmed down to a manageable 6-8ft. Having waves like that smash over the boat, especially a boat of that size was pretty intense.

The fun wasn’t over though. As our 4 1/2 hour passage to Elizabeth Harbour progressed the waves grew. Captain Mike zig-zagged so we didn’t take the waves on the beam and have us rolling all over the place, but it was still pretty bad. Glasses were breaking, the fridge flew open throwing food everywhere, pictures came off the walls…it was a mess. And the thing is, you pretty much have to let all the chaos and mess happen. It’s impossible to walk and clean anything up in seas like that without getting hurt.

So the most frightening moment happened right towards the end of this passage as we were lining up to come into Elizabeth Harbour. We weren’t quite sure if the waves were going to pile up on us like they did coming out of Rudder Cut Cay. If they did and the way we were going to have to turn to come into the harbour meant that we would have to take those big waves right on our beam for a minute or two. The same type of waves you really need to take head on. Taking them on the side (or beam) means there’s a chance they could roll you over and capsize the vessel. 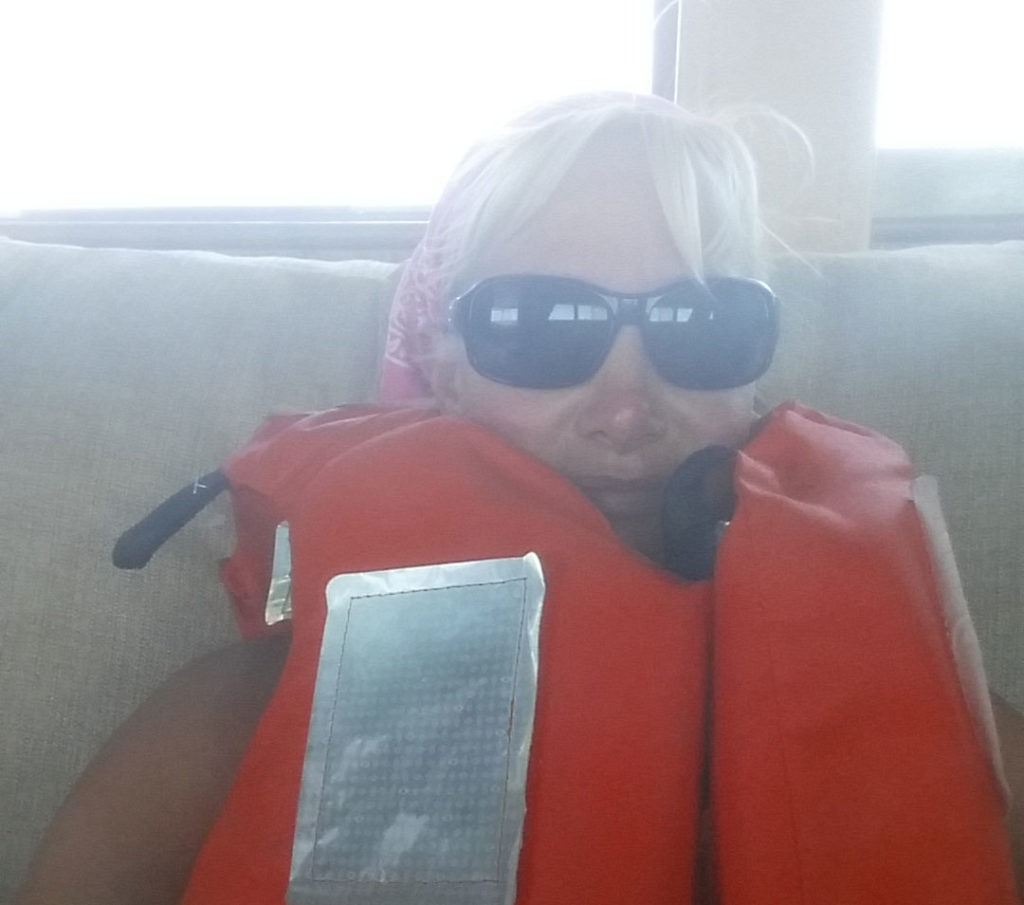 Captain knew this and prepared us. He gave me the emergency life beacon and told us to put life jackets on. My stomach pretty much sunk to my feet when this happened. I really didn’t know how dangerous of a situation we could be in. I got on the phone with a captain friend of mine from Great Exuma and a marina trying to find out what the wave conditions were like coming into the harbour. Both were like, “yeah mon, no problems. Plenty of room and easy.” That made me feel better but I wasn’t sure if they were just being the typical laid back “no worries” islanders or it was really going to be okay. We made ready and took the turn.

Turns out the entrance to the north end of the harbour is wide and the shelf from the deep to shallow water is pretty gradual. This didn’t stack up the waves like before. We took a couple 7ft rollers on beam but it wasn’t too bad. Once in the harbour we anchored just south of Chat N’ Chill beach bar and let our nerves settle for a bit. A rum drink was much needed.

We were safely anchored in one of the most beautiful places in the Bahamas, yet these days did not go well either. I don’t want to go into much detail, but Captain had to leave and we stayed behind to watch over the boat. We lounged at Chat N’ Chill and did some beach exploring but the weather was still blowing and it prevented me from raising and lowering the dinghy off the top deck. Sure I probably could have been done, but I wasn’t confident just the two of us could manage without breaking anything in those condition. Since our luck hadn’t been that great I wasn’t going to chance it. We finally flew home that Saturday from Great Exuma and landed safely in Miami. It was trip that was full of ups and downs both literally and figuratively. We came out alive, gained some great stories, and came to respect the sea a little more. Sure we didn’t hit Cat Island, Rum Cay, Long Island or the Turks and Caicos, but we did get stuck in a pretty great place. They only thing you can do is sit back, laugh at the misfortune, and have another rum punch.

If you have a dream trip that didn’t go well I’d love to hear about it!