A Salty Proposal to a Beautiful Mermaid

The following is a behind the scenes look at a special moment that was a long time coming. You’ll see how my mind works and doesn’t work on the day I asked Castaway Crystal to marry me.

If you read my two-part story about The Trip That Wasn’t, then you’ll know that I was planning to propose on Cat Island at The Hermitage on Mt. Alvernia. Crystal is a big cat lover and it’s the highest point in the Bahamas. What could be better right? Well, long story short, the weather kept us form making it to Cat Island and so this pirate had to come up with a Plan B.

I had the ring stashed away in a secret hiding spot for about 2 months even before the 10/16 to 10/30 Bahamas trip, so I was burning to give it to her. It just had to be the right time and place. So the very next weekend after getting back from the disastrous Bahamas trip, I rented a boat from Best Boat Rentals through Sunny Island Adventures on Captiva Island and pointed our little pontoon north to Cayo Costa. Crystal was completely in the dark. She had been dropping little hints about wanting a ring for months, but every time she did I would act a little annoyed or pressured. Jerk move I know! But I wanted to keep her guessing, never knowing when it would happen.

A time when she dropped one of these hints she said something like, “Oh you found the card in your pocket, you didn’t find a diamond ring in there as well did you?” Just so happened the day she said that was the day I was taking the stone to be mounted in the setting and I had the diamond in my pocket! I about crapped my pants and just blew it off…but knew it would be a good story to tell her (and you) when everything was out in the open.

So back to the proposal.

We cruised past South Seas Resort and through Redfish Pass out into the Gulf, cruising up the coastline of North Captiva Island. The water was calm with just a bit of a northwest swell. Dolphins were everywhere and the sun was shining, it was a glorious day to be alive and to propose to my best friend.

We stopped at a beach on North Captiva to take some photos and relax a bit, all the while I’m trying to concentrate on my plan and what I’m going to say. It was probably about 9:45am at this point but I had already cracked open my first adult beverage, the nerves needed to be calmed a little! 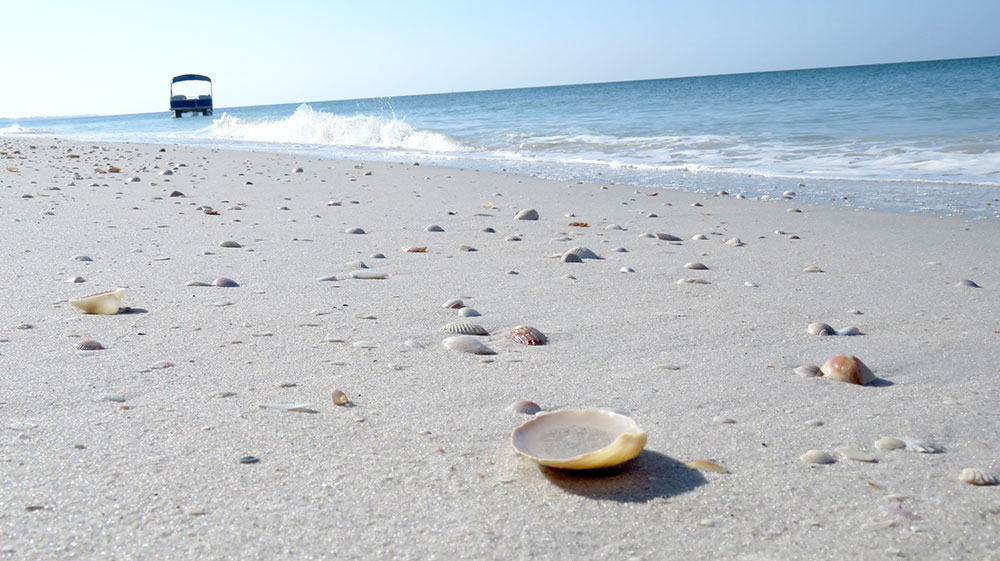 On the way to Cayo Costa, the next island north, Crystal had said it would be nice to have something on her finger when we fly up to North Carolina in the spring so that I can meet her father for the first time. AHHHHH!! The already nervous me quickly shot that down and in a somewhat polite way I asked her to stop pressuring me so much. Obviously I knew she would have it on her finger in less than an hour but I had to keep her in the dark.

I dropped anchor on the Gulf side of the south end of Cayo Costa. If you know the island, you’ll know that this spot could be put on a post card. Beautiful white sand, lots of old dead trees litter the shore and stunning water. It’s one of my favorite spots in southwest Florida and it’s the spot I’m going to ask Crystal to be my wife.

To keep her guessing even more, I had told her we needed to shoot a drink recipe for Papa’s Pilar Rum and Cayo Costa was going to be the spot. So we brought all the gear up on the beach, and I set up a little make-shift bar on one of the dead trees. Crystal gets a little nervous when we do videos so we always do a couple rehearsals. I knew this wasn’t going to be a real video drink recipe, at least not right now, so my mind was racing trying to make sure I knew what to say, where to stand, where to kneel, where the ring was, and so much more. All the while I had to pretend to have my head in the game for a video shoot. AHHHHH!

Now with everything set and her thinking it was time to do a drink recipe, I hit the record button on the camera and readied myself. Was I nervous? Yes. Did I know what to say? Yes. Did I say those things? No.

Crystal and I would like to share that moment with you. As you can see by my voice cracking and stumbling over words, I was a ball of excitement and nerves.

My heart was pounding out of my chest, but it felt so good to say those words and finally give her something sparkly to put on her finger. She’s my best friend, my partner in crime, and the girl of my dreams…what she sees in me, I have no idea, but now I’m lucky enough to call her mine forever.

After the proposal we laughed, we cried, and we took in the moment. Believe it or not, afterwards we still shot that drink video for Papa’s Pilar Rum. The drink is called The Survivor and will be posted here next week.

Once we collected ourselves, we pulled anchor and circled the island of Cayo Costa. We took in the beauty of the area, we soaked in the importance of the moment. Cabbage Key was next on the list for lunch and then a quick stop at Barnacles on North Captiva before we headed back to the rental boat marina. It was a fantastic day, one that was a long time coming. I can’t wait for all the future island adventures with the soon to be Mrs. RumShopRyan, my beautiful beach girl.

Thank you for letting me share this with you Castaways!