9 Things To Know Before Diving In The Belize Barrier Reef

Hey Castaways, if you loving diving and love Belize, then you’re going to enjoy this guest post by Joe Black. Cheers!

I’m Joe, I run Nature Rated. I love spending time in the outdoors. Whenever daily life gets me down I head to the nearest lake or river with my kayak and my camera and I spend time recharging my batteries. I hope you’ll love my no fluff to the point reviews and that they’ll help you choose the right gear for your next adventure! 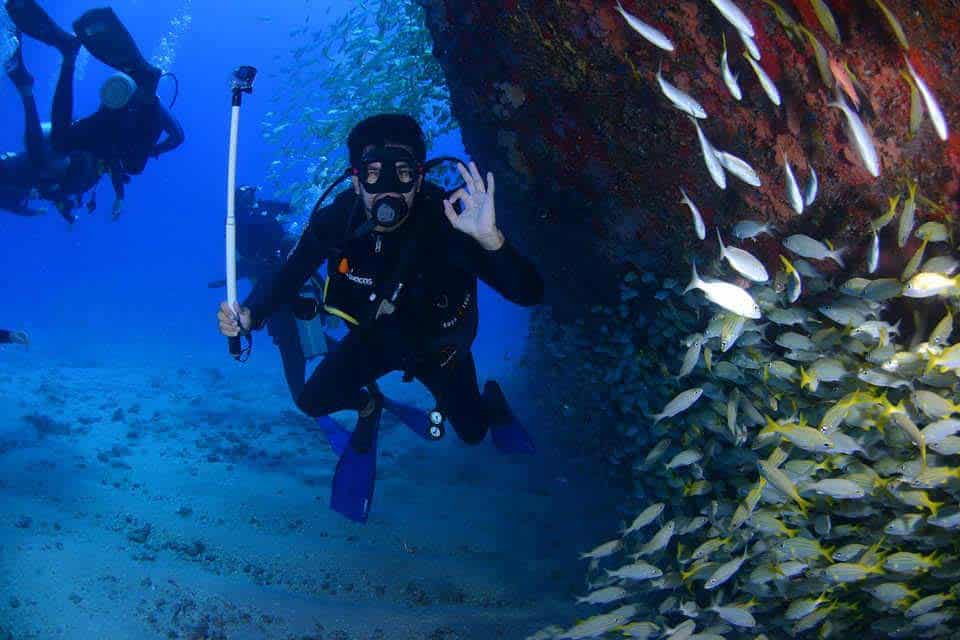 It is one thing to visit and dive in the Belize Barrier Reef. It’s another to understand what makes this destination one of the Great Wonders of the World. Before you put on your snorkel gear, test your knowledge and see how many of the facts below you already know.

1. The Belize Barrier Reef is the largest double barrier reef in the world

2. It is one of two real barrier reefs in the Western Hemisphere

If we are to go by the scientific definition put forward by Darwin, there are only two barrier reefs in the Western Hemisphere. These include a small one off the coast of Nicaragua in Providencia and Belize Barrier Reef. There are claims of other barrier reefs in the Western Hemisphere including the Andros Island Barrier Reef and the Florida Reef Track. The Andros Conservancy and Trust however markets it as a fringing reef and notes that it has some features of a real barrier reef. The Belize Barrier Reef Reserve System was registered as a UNESCO World Heritage Site in 1966. The system is made up of seven designated protected areas i.e. Sapodilla Cayes Marine Reserve, Laughing Bird Caye National Park, Glover’s Reef Marine Reserve, South Water Caye Natural Monument, Half Moon Caye Natural Monument as well as the Bacalar Chico National Park and Marine Reserve. These only make a small part of the Belize Barrier Reef with other significant areas including Hol Chan Marine Reserve, the most visited area by divers. The reef is currently on the UNESCO danger list due to massive bleaching most likely due to tourism and bleaching.

4. Three or four coral atolls outside the Indo-Pacific are in Belize Barrier Reef

While the number of atolls is something else that scientists don’t agree on, there are four atolls outside of the Indo-Pacific that fit the definition. Three of these including Glover’s Reef, Turneffe Atoll and Lighthouse Reef are located in the Belize Barrier Reef. They are built on top of an ancient submerged mountain ridge.  Almost 20 Caribbean Atolls share some of the traits of coral reefs but the closest they come is what’s known as coral banks.

5. Belize Barrier Reef was not formed by volcanic activity

The Belize Barrier Reef is a structure completely submerged in water and whose coral is thought to have been formed sometime in the past 500,000 years. The limestone rocks upon which the corals grow are estimated to be anywhere between 2 and 135 million years old. Being so far back in the history, it’s hard for marine scientists to give accurate estimates. The discovery of large stalactites in underwater caves has proved that the formation of the Belize Barrier Reef was due to the most recent glacial period and not volcanic activity as one would expect. While the formation has been entirely natural, the reef has been victim to extensive damage over the past 50 years.

6. It is the country’s number one tourist attraction Belize Barrier Reef is Belize’s most popular tourist attraction luring visitors from all over the world eager to explore the 600 km by 300 km system. Students, tourists, scientists and visitors flock here to learn more about its biodiversity and explore the reef topography for photographic, enjoyment and scientific purposes. It’s however the underworld part of the reef that draws the vast numbers of snorkelers and divers all year. This has led to a major boost to the country’s restaurant, resort and associated commercial interests, generating millions of dollars every year.

Even though the Belize Barrier Reef is the subject countless articles, studies as well as scholarly publications, you will be surprised to know that 90% of it remains unexplored. Only 10% of the reef and the aquatic life found in this section have been investigated. There remain many secrets that are yet to be discovered in future when biologists get around to exploring further.

8. Belize can teach us a thing or two about harmony and diversity

The Belize Barrier Reef as a model is home to hundreds of exotic invertebrates, 36 species of coral, 70 hard coral species and 500 types of fish just to name a few. They all manage to get along nicely despite the biological imperatives that can cause rivalry not to mention crowding in such a diverse part of the world.

9. Belize Barrier Reef was first introduced to the world by Charles Darwin

While there is no shortage of celebrities who have introduced the Barrier Reef to the world, Charles Darwin became the first in 1842 when he brought home the news of the most remarkable reef in the West Indies. Jacques Cousteau was one of the best friends of the reef during the 20th century and his research, documentaries as well as books are a great source of information for serious divers.