Hey guys! As our loyal readers, you know our posts are usually full of tantalizing pictures that are meant to inspire you to travel to your next pristine tropical destination. I’m sorry, but this post is nothing like that. This post is about our reality at the moment, and as you know, reality isn’t always pretty. Actually, it’s quite disturbing as some of the following pictures will be.

Something horrible, and beyond heartbreaking, is going on in our home paradise here in Southwest Florida. It has been brought to my attention that not many people outside our area are aware of the ecological catastrophe that’s going on here. So I decided to write this post to create awareness and act as our SOS in hopes it will get shared enough to reach the right people who can help end this nightmare.

Our beloved beaches stench of death as our precious wildlife dies on a daily basis and lifeless bodies are being washed ashore.

Why is this happening?

This depressing scene is due to toxic water being released into the Caloosahatchee River (and St. Lucie River on the east coast) which drains into the Gulf of Mexico. This pollution exasperates the natural phenomenon known as Red Tide and Blue Green Algae. This is something we have been fighting against for years, but this year, the repercussions are the worst we have ever seen. Usually the causalities are small fish that you’ll find along the shorelines whenever Red Tide flares up.

But with every release, the toxicity is becoming more intense. Bigger animals are dying now. This past month there have been accounts of manatees, dolphins, endangered sea turtles, birds, fish of all sizes, and sharks…EVEN A WHALE SHARK washed up on Sanibel!

Sanibel is well known for it’s copious amounts of seashells, and shellers from near and far never tire of picking up small treasures to take home. But now instead of collecting pretty shells on the beach, it would be more helpful to pick up a fish corpse or two to help get rid of the ungodly smell. IT DOESN’T ONLY AFFECT ANIMALS!

That’s right. Our health is in danger too!

Some people have been hospitalized who have come in contact with the water.

Rashes, illnesses, respiratory issues and flesh eating bacteria are what you’ll want to consider the next time you think about cooling off in the southwest Florida waters. If you’re near the beach, breathing the air alone can make some cough (it does for me) and eyes water.

You guys know how much we love going to the beach. Before this summer, we were there every weekend (you’ve seen the pictures). But we can’t now, it’s too dangerous. Plus I can’t bare to take the chance of seeing a dead dolphin or manatee wash up on shore. The photos on Facebook are gut wrenching enough.

Then there’s tourism and our economy that will suffer – which I know this article isn’t going to help but people need to be informed. I was aware of this after an encounter we had last weekend.

Ryan and I were flying home from North Carolina (can you believe it, we went NORTH). Our flight was delayed and we ended up talking to a young couple who were coming down to stay on Sanibel for the first time. All I could think about was how sad and disappointed they were going to be once they saw the condition of our water and beaches.

We didn’t have the heart to tell them the truth. We didn’t want give them more bad news when they were already dealing with the flight delay. What an awful way to start a trip – hey, not only are you going to be 5 hours late but you’re walking into an unnatural disaster thanks to greed and corruption. Greed and corruption? More on this in a moment.

But travelers need to know! They need to be safe and not take chances with possible health hazards. They shouldn’t spend their hard earned cash only to be discouraged by the sight of carcasses lining the beach and ugly brown (like iced tea brown, chocolate milk brown) or pea soup green water. WHY IS THE TOXIC WATER BEING DUMPED AND HOW CAN WE STOP IT?

The US Sugar Corporation is located in the middle of the Everglades and their land surrounds the southern end of Lake Okeechobee.

Lake Okeechobee’s natural flow of excess water is south, but since an unnamed hurricane in 1928 killed an estimated 2500 people due to Lake Okeechobee flooding, a levee was built around parts of the lake to prevent loss of human life. The U.S. Army Corps of Engineers built this levee not knowing the full environmental affect it would have down the line. 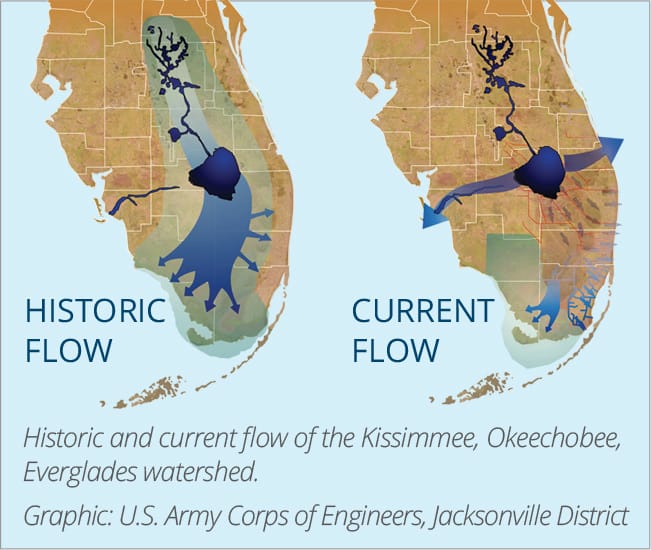 Why not just send the water south? Because Big Sugar moved in and bought all the land, preventing any type of natural water flow to the Everglades. What’s worse, the runoff from these sugarcane fields and other farms ends up in Lake Okeechobee, turning it into a poisonous body of water.

When the water levels get too high in Lake Okeechobee, usually due to the summer rainy season, the U.S. Army Corps of Engineers have to conduct releases in order to protect the levee. These releases send all of this agricultural waste infested water down canals to the east and west coasts of Florida, connecting to the Caloosahatchee River and St. Lucie River, and eventually dumping into the Gulf of Mexico and the Atlantic Ocean. The nutrient rich fresh water does NOT mix well with the salt water ecosystems of the sea. As I mentioned before, this contaminated water is what helps produce Red Tide, and Blue-Green Algae Blooms. Yes, Red Tide and algae blooms can occur naturally, just not to this devastating scale.

At one point the government and Big Sugar had an agreement for an Everglades restoration project. The State has (or had) the money to buy property from the US Sugar Corp that would make way for the water to flow south. But both parties have bailed out. The government says it’s too expensive of a job and Big Sugar decided they didn’t want to sell their land anymore.

The Everglades restoration project (learn more about it here) is the only way to save our ecosystem. We need a new governor and senators who care about the environment, want to execute this project, and not be paid off by big corporations. Is there such a thing, or is that like finding a unicorn standing next to a leprechaun holding a pot of gold?

So what can we do? As of now, those in charge won’t help us. The EPA is nowhere to be found (this is kind of your job guys! How do you still get a paycheck?!). We are basically sitting ducks, watching what we love about Southwest Florida deteriorate due to, as I said before, greed and a corrupt government.

The concerned citizens here in the affected areas think the media and the higher-ups are trying to keep this quiet. We need more people to know what’s REALLY happening! We need to save our wildlife! We need clean water again! We are sending out an SOS! Please send help!

Below are a few links for more information on our crisis. There is also a link for a petition to stop the drainage of Lake Okeechobee.

Thank you for taking the time to read this. If you love the beaches and sea life of Florida as much as I do, I know you’ll do whatever you can to help. Thank you!